« Greens ratchet up the pressure on Obama not to approve Keystone | Sen. Brown and the Tipped-Worker Minimum Wage Hike »
|

In fierce battles overnight, police and demonstrators squared off in Independence Square in Kiev as authorities tried to end the month long protests against the regime's canceling of an EU trade pact and move toward Russia.

CNN is reporting that 25 protestors and police were killed in the riots:

After the deaths of 25 people in clashes a day earlier, Ukrainian protesters are prepared to stand and fight again Wednesday.

Police want to clear them out of central Kiev. Some of them died trying to stay put Tuesday -- using projectiles and burning barricades to keep security forces at bay at Kiev's Maidan, or Independence Square.

It was the deadliest day in the months-long standoff between the government and opposition leaders.

Thousands of demonstrators have packed Independence Square since November, when President Viktor Yanukovych reversed a decision to sign a trade deal with the European Union and instead turned toward Russia.

The unrest intensified after an anti-protest law went into effect. Throngs of demonstrators took to the streets to protest the law.

Police and protesters were among Tuesday's dead. A journalist and a government employee died, too.

More than 240 others were hospitalized, Ukraine's health ministry said.

They prepared a makeshift compressed-air cannon to catapult the projectiles into police ranks.

Hundreds of others came out to give moral support to those holding the square and to add their numbers to the throng wanting to keep the opposition movement alive.

Corporate lawyer Volodymyr Solohub was one of them. Whenever police threaten to clear the Maidan he goes there.

Tuesday, he watched as protesters rushed injured people from the front lines to medics.

"Some of them had broken hands, and blood was flowing down their faces," he said Wednesday.

Barrages of stun grenades shattered the air around him through the night.

"When it goes off, the whole area vibrates," he said. But the barricades held, and it made him happy.

When the sun rose Wednesday, smoke was still rising from them into the sky.

The entire square was a mass of flames: 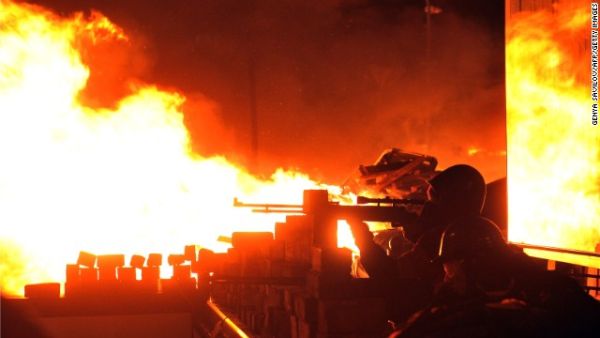 The conflict has cultural overtones as well as political and economic fractures. The country is divided between the Russian speaking, pro-Moscow east and Ukraine speaking, pro-western west. The trade pact with the EU would not have meant full integration, but it would have bonded the Ukraine to the EU's single market. The alternative offered by President Yanukovych would place the Ukraine squarely under the thumb of Vladimir Putin - a prospect that more independent-minded Ukrainians couldn't accept.

The protestors abandoned their occupation of city hall last week, which seemed to defuse the crisis - for a few days. But the draconian anti-protest measures passed by parliament that criminalized dissent brought them back into the square in a rush. It's hard to see either side backing down at this point.

Meanwhile, in Venezuela, hundreds of thousands of protestors took to the streets to demonstrate against the repressive Maduro regime and its incompetent management of the socialist economy. Several people have died in the protests and the government ordered the arrest of opposition leader Leopoldo Lopez and have charged him with murder.

Lopez defied the efforts to arrest him, but turned himself in yesterday.

Crowds of white-clad protesters stood in the way of the vehicle carrying the 42-year-old Harvard-educated economist after he made a defiant speech, said an emotional farewell to his family, and gave himself up to soldiers.

The vehicle eventually reached a military base.

Opposition leaders hope Lopez's arrest will galvanize street demonstrations against President Nicolas Maduro, though there is no immediate sign the protests will topple the socialist leader.

"I am handing myself over to an unfair justice system," the protest leader told supporters, standing on a platform next to a statue of Cuban poet and independence hero Jose Marti.

"May my imprisonment serve to wake the people up."

The crowd lifted his wife up to give him a final embrace and hang a crucifix around his neck.

Minutes later, he surrendered to military officers, pumping his fist and then stepping into the military vehicle with a Venezuelan flag in one hand and a white flower in the other.

Supporters impeded the vehicle's progress for several kilometers (miles) and later gathered at the gates of the La Carlota air-base where he was taken. They disbursed in the late afternoon as a tropical downpour broke out.

In a speech to a rival rally of his own supporters, Maduro said he had sent the Vice President of the Socialist Party, Congress Chief Diosdado Cabello, to help transport Lopez.

Lopez's Popular Will party said he had been taken to court where authorities would formally read him the charges, which include murder and terrorism. Lopez says he is being made a scapegoat by a dictatorial government.

Fausta Wertz has been liveblogging the protests and reports there's a possibility that Lopez will be flown to Cuba,

Fausta also links to an article from The Americas Report that explains what the protests are about:

The protests are not just about inflation, scarcity and poverty that now characterize the Venezuelan economy but also about repression and lack of freedom.

In addition, it is about the soul of the Venezuelan nation. Demonstrators have become totally convinced that there is no electoral exit to a regime that turns more and more oppressive as time goes by. Maduro, like Hugo Chavez before him, aims at perpetuating his power and exercising total control over the Venezuelan state and society. The Venezuelan Government secured the loyalty of the military to its despotic rule and has repressed trade unions, the media, business and professional associations. It politicized every corner of Venezuela rewarding loyalist and sycophants and destroying, exiling and blocking opponents.

The military has no problem in watching how Venezuelans are being killed by the paramilitary. As Venezuelan journalist Nelson Bocaranda revealed more than a year ago, Venezuelan and Cuban generals agreed that they would protect the Bolivarian government even by carrying out a self-coup.

The paramilitary used by the Venezuelan government to repress protestors and opponents are mostly thugs that have been given freedom to act by the government that hired them. Such freedom eventually led to a meteoric increase in crime and insecurity in the country. Rampant crime is not just a social problem. The Chavez and Maduro governments have directly and indirectly encouraged it. Otherwise, how can we explain that an oppressive regime cannot "oppress" its criminals, who continue to enjoy impunity?

So criminality is an integral part of this "progressive" revolution whose authoritarian nature was given legitimacy in the most recent conference of the Community of Latin American and Caribbean States (CELAC).

The scene in Carracasis incredible: 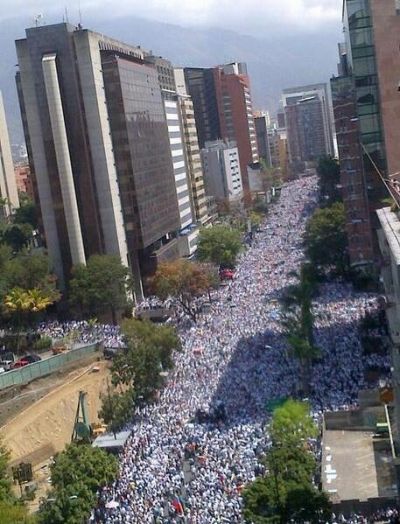 So where's the US? We sicced Joe Biden on the Ukrainian government:

U.S. Vice President Joe Biden called Yanukovych to press him to stop the violence, placing the responsibility to de-escalate mainly with government.

Secretary of State John Kerry later backed up the Vice President's words. He called for the Ukrainian government to halt violence immediately, and reopen dialogue with the opposition.

The State Departmnet is similarly wringing its hands over Venezuela.

Perhaps we'll up the pressure on both governments and send them the dreaded "strongly worded letter." Yeah. That'll work.