Warning: mysqli_free_result() expects parameter 1 to be mysqli_result, bool given in /var/www/html/americanthinker/admin/common/functions/func.general.php on line 126
 You are what you drink, says new study - American Thinker
« Four injunctions against the Obamacare contraceptive mandate yesterday | Nearly 11 million Americans on disability at the end of 2013 »
|

You are what you drink, says new study

Are you partial to Wild Turkey Kentucky Bourbon? Chances are, you are a solid Republican. Perhaps your preferred drink is Wild Loon?

Yes - that makes you a Democrat at least twice over.

The results are fascinating: Analyzing voting habits of those who imbibe, Dube found that 14 of the top 15 brands that indicate someone is most likely to vote are wines.

If you see someone at your New Years party tonight drinking Kendall-Jackson or Robert Mondavi wines, that person is highly likely to vote, and they're likely to vote Republican. Someone who savors a Chateau Ste. Michelle Merlot, one of Washington State's top producers, or Smoking Loon, they're likely to cast ballots for Democrats.

And, perhaps not surprisingly, given the relative youth of those involved, people who take shots of Jagermeister or Don Julio are much less likely to vote.

The ironies abound. The comedian Bill Maher once accused House Speaker John Boehner of doing a shot of Wild Turkey every time House Republicans voted to defund Obamacare; little did he know Wild Turkey is one of the most heavily Republican brands. Smoking Loon, the Democratic-leaning wine, was formerly run by Don Sebastiani, who served three terms in the California state Assembly -- as a Republican.

Rum appears to be the most biparitsan drink. Both Bacardi and Captain Morgan Spiced Rum fall right in the middle of the political spectrum.

Champagne, as it turns out, is mostly a Democratic drink. 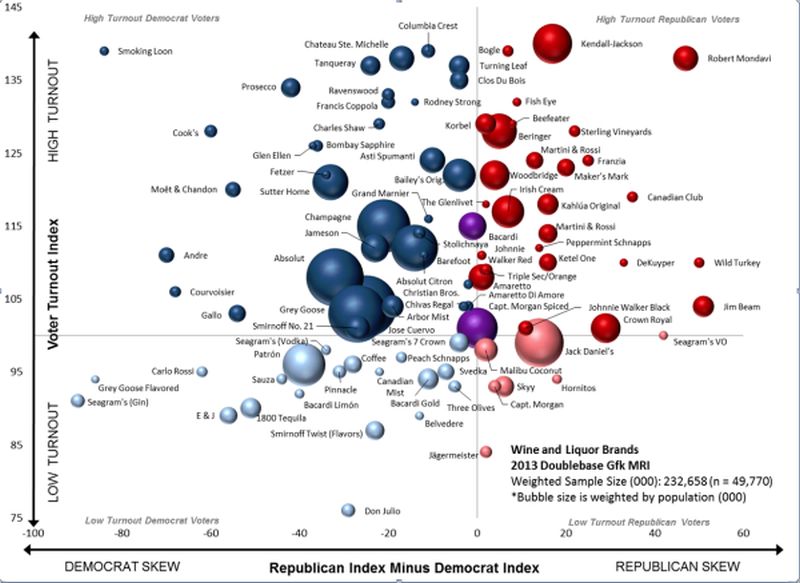