Did you hear about the students at a famous university who have gotten upset because a member of a small racial minority there was pictured in an ad directed at the student body? For some reason, the national media doesn't find this anti-diversity position of much interest. However, local media have the story. WTOP-TV Washington reports:

A Giant grocery store ad welcoming back Howard University students from winter break has rankled the Howard community because the ad pictured a young, white female. The vast majority of students at Howard, a historically black university, are African-American.

People started calling the company out on Twitter late last week, noting that the picture of the woman in the ad doesn't reflect a typical Howard University student. 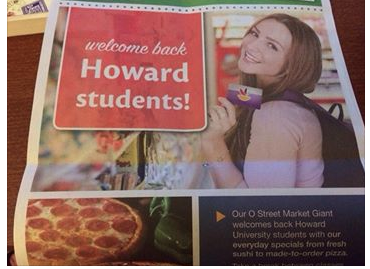 Needless to say, the store is apologizing for its diversity:

"Unfortunately an incorrect stock photo was used in the ad and we apologize for this oversight," Jamie Miller, spokesman for Giant, told me in an email. "We wish all Howard University students a successful semester." It's unclear whether those circulars are still available in the store.

This should make clear, if you ever had any doubt, that "diversity" is a scam, because what people want is not diversity, but rather to advantage some groups and disadvantage others. And underlying that is hate. Switch the races, and see for yourself.