Warning: mysqli_free_result() expects parameter 1 to be mysqli_result, bool given in /var/www/html/americanthinker/admin/common/functions/func.general.php on line 126
 Reports of Obama marital strife break out of the National Enquirer ghetto - American Thinker
« Taliban targets foreigners in latest Afghanistan attack | Voting with their feet against China »
|

For the past couple of weeks, the National Enquirer has been publishing prominent stories claiming that the marriage of President and Mrs. Obama is in deep trouble, and that after his term in office is over, she will file divorce papers. Because the Enquirer has earned so much credibility by breaking the story of John Edwards' love child (a rumor that mainstream media outlets were aware of yet failed to pursue when he was a candidate for Vice President of the United States), these reports cannot be dismissed as tabloid tomfoolery.

The UK Daily Mail, which touts itself as the world's most-read news website, is the first major news source beyond the supermarket tabloid ghetto to pick up the story: 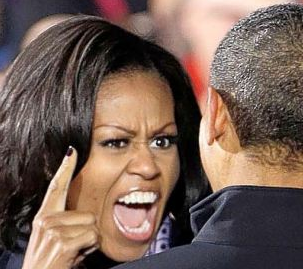 ...if the U.S. tabloids are to be believed, the relationship of Washington's golden couple is facing problems that go far beyond dirty looks.

Under the headline Obama Divorce Bombshell!, the National Enquirer claims their 21-year marriage has dissolved in a string of ugly fights that were prompted by the Mandela memorial incident and - far more outrageously - Mrs Obama's discovery that Secret Service bodyguards had been covering up infidelity on her husband's part.

It's an allegation the White House has declined to comment on, though after Bill Clinton's trouser-dropping scandals, Americans would be rather less sanguine about any extra-marital activity than the French appear to be over President Francois Hollande's behaviour.

Mrs Obama, the Enquirer claims, intends to stand by her husband until his presidency is over, at which time he will move back to Hawaii, where he grew up, and she will stay in Washington with their children.

For the moment, they are allegedly sleeping in separate bedrooms after Mr Obama's attempt to 'mend fences' backfired so badly on a recent Christmas getaway to Hawaii that he returned to Washington with their two daughters, leaving his wife behind.

The National Enquirer, it must be said, quoted only anonymous insiders in support of these sensational claims, and is hardly the most reliable source of hard news.

Obama advisers are certainly not talking as if there is any scandal in the offing.

It must be very painful for the Obama teen age children, Sasha and Malia, to read such rumors, which, even if the Daily Mail and Enquirer are not on their radar screen, they will surely hear about from school mates at the exclusive and politically plugged-in Washington Friends School. But to the extent that the family spends time together in the White House, they may already be well aware of the tensions between their parents.  Although it is not widely discussed in the American media, Michelle Obama's mother resides in the White House and is reported to take on much responsibility for the girls, while both parents pursue their busy schedules, which include a lot of travel.

The Mail cites some interesting reports of marital tension in previous years:

Since he was elected President, two books have claimed the couple came close to splitting in their early years together, with Mrs Obama even drawing up divorce papers after deciding his burning political ambition was ruining their chances of domestic happiness.

'There was little conversation and even less romance. She was angry at his selfishness and careerism; he thought she was cold and ungrateful,' wrote Wolffe.

At the time, Mrs Obama had only recently become a mother - their daughters Malia and Sasha are now 15 and 12. Her husband, whom she had met while they were both working for a Chicago law firm in 1989, was a mere State Senator in Illinois who had just been thrashed in a battle for a seat in Congress.

'She hated the failed race for Congress in 2000 and their marriage was strained by the time their younger daughter, Sasha, was born,' wrote Wolffe in Renegade.

Wolffe noted, though, that they seemed to have got over their past issues by the time they made it to the White House. (snip)

In 2012, meanwhile, political writer Edward Klein claimed Mr Obama had become so depressed about his failing marriage in 2000 that friends feared he was contemplating suicide.

Mrs Obama had been furious because she had warned him not to fight the disastrous Congress election battle which he lost, said Klein.

'During the dark days that followed his defeat, he turned to Michelle for comfort. But she was in no mood to offer him sympathy,' wrote Klein, who claimed Michelle's friends told him she had even drawn up divorce papers.

'He had dashed Michelle's hopes of creating a stable and secure future,' he wrote. 'As a result their marriage was on the rocks, and Obama confided to friends that he and Michelle were talking about divorce.'

Marriages require a lot of time and energy if they are to remain a continuing source of comfort and support for both members. Given their many outside activities, there may be not much room for the necessary commitments.  I am quite sympathetic to both sides in this struggle to remain together (if that is indeed what they are trying to do - an open question). Their daughters deserve nothing less.

But this marriage is more than a private affair. Mrs. Obama has taken on a prominent political role, and is a public player in the political strategies of the Obama presidency. Should the Obamas part ways, I encourage Mrs. O to write a series of tell-alls, earning a substantial fortune of her own in the process.