Warning: mysqli_free_result() expects parameter 1 to be mysqli_result, bool given in /var/www/html/americanthinker/admin/common/functions/func.general.php on line 126
 President Obama's brother declares his intent to destroy Israel - American Thinker
« What happens when public workers don't have to join a union? They don"t | GOP backing away from debt ceiling fight »
|

President Obama may not be his brother's keeper, but he certainly has honored his half-brother Malik. When he married Michelle Robinson, his best man was Malik. And the president of the Barack H. Obama Foundation? None other than Malik. And that very foundation was fast-tracked to nonprofit status approval at the same time that Tea Party affiliates were being grilled on the content of their prayers.

The Barack H. Obama Foundation was fast-tracked to IRS tax-exempt status at the same time that the IRS was abusing numerous Tea Party and conservative groups. While those groups' tax-exempt applications were taking two years and mountains of paperwork and invasive queries about their memberships and activities, the Barack H. Obama Foundation won its status in just 30 days. That status was back-dated 38 months, which is against the law.

So when Malik Obama posts a picture of himself to the Foundation website, it carries a certain presidential imprimatur. Bryan Preston of PJ Media posted it: 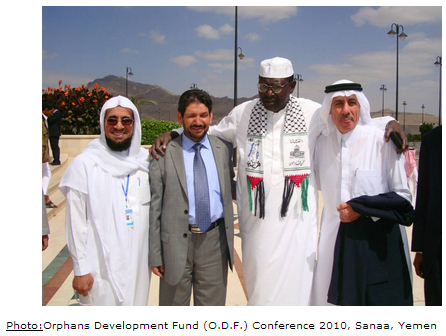 That scarf is pretty special. See this close-up: 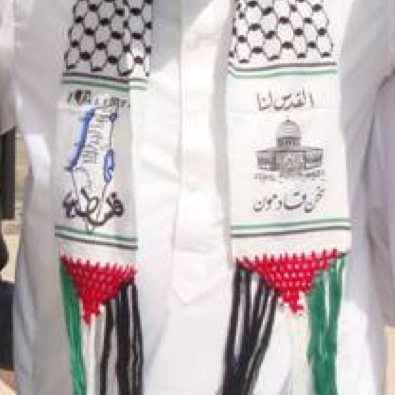 What does it mean? Walid Shoebat explains:

he can be seen wearing a Hamas scarf (keffiyeh) that bears a well-known Palestinian slogan - 'Jerusalem is ours - WE ARE COMING!' It also includes a map of Palestine that says, 'From the River to the Sea!' In other words, Malik is saying, THERE IS NO ISRAEL.

Just in case we're told that Malik was conned into wearing such a hateful and racist symbol like Swedish King Carl Gustaf and his wife Queen Sylvia were, consider a few things. Carl and Sylvia quickly took the keffiyeh's off after having them placed on them by an opportunist and distanced themselves from the message.

Malik is a much different story.

Malik reads and speaks fluent Arabic as do many in his family, like cousin Musa Ismail Obama and uncle Sayyid, who've been to at least one prominent Wahhabist university in Saudi Arabia. Barack recited the opening lines of the Arabic call to prayer with a 'first-rate accent' according to the New York Times' Nicholas Kristof.

The keffiyeh (or scarf) doesn't just say, 'Al Aqsa is ours and is not their temple'. It also says 'Innana Qadimun', which translates to mean 'We are marching forward'. This famous battle command which is a reference to the prophecy that some day the Muslim world will march on Jerusalem and then the trees and stones will cry out, 'here is a Jew hiding behind me... come O Muslim, come and kill him'.