Warning: mysqli_free_result() expects parameter 1 to be mysqli_result, bool given in /var/www/html/americanthinker/admin/common/functions/func.general.php on line 126
 Oh, the horror of Israel's disengagement from Gaza - American Thinker
« Question for ObamaCare: Where's the money? | The US should not be #13 in any economic freedom index »
|

Oh, the horror of Israel's disengagement from Gaza

It seems many of the objects of the not so good professors' concerns have other opinions as evidenced by this vivid example on an Arab's Facebook page. 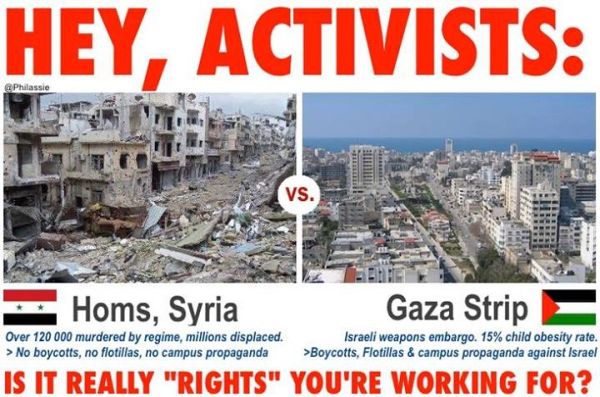 According to the Google Chrome translation from DaTechGuy:

Imagine: Israel is jealous of the preferential treatment received by the Assad regime from the international community: How do you boycott our goods, and Tgeshun universities against us, and you send fleets to lift the siege on Gaza, while suffering 15 percent of children are obese from eating too much. In Syria, Assad has killed more than 120 000 Syrian, and made millions homeless, with no one calling for a boycott, or the surge in international universities against his regime, and no one sends ships to lift the blockade on the besieged areas of Syria. Imagine: Even Israel is jealous of this international complicity with Assad.

But don't confuse the bigoted professors who agreed to debase their academic organizations, including President Barack Obama's (D) good pal, Bill Ayers, Professor of Education at the University of Illinois at Chicago, with facts and proof.  What would they do?  What could they do?