Warning: mysqli_free_result() expects parameter 1 to be mysqli_result, bool given in /var/www/html/americanthinker/admin/common/functions/func.general.php on line 126
 How Global Warming Makes it Warmer and Colder - American Thinker
« Black Caucus in public tiff with Obama over judges | Irony Abounds As Food Stamps Abound »
|

How Global Warming Makes it Warmer and Colder

Every time events fail to confirm the predictions of the global warming models, we see putative scientists thinking up excuses, like a "pause" that just interrupts the inevitable, absolutely beyond dispute, no discussion allowed predictions that...uhh...are just around the corner. While amusing it is also pathetic. And even worse are the journalists and non-specialist scientists who accept rationalization in place of rigor.

How much better to slip the surly bonds of honesty and fabricate a convincing explanation (as long as you don't think about it and are willing to accept whatever the mainstream media serves up)! In other words, target the low information voters and count of them being unreflective, aka stupid.

And who better to execute logical contortions that a veteran propagandist from the old USSR. Such a man is Oleg Atbashian of The People's Cube. Here is the first half of his satirical essay written in collaboration with his friend, Will Beria (in the second half they explains the phenomenon of deniers):

In cold years like these, climate change deniers always ask a trick question, "How come global warming can cause both heating and cooling?" The answer is actually quite simple.

Let's go one step further. Things can also boring as Hell, as in "nothing's happening, it's the same old same-old." Thus, Hell can also mean that things don't change. If you've followed the reasoning so far, you can clearly see that if it gets hotter, colder, or temperatures are flat, it's due to global warming. Just as predicted.

Oleg Atbashian is on a roll this weekend.. 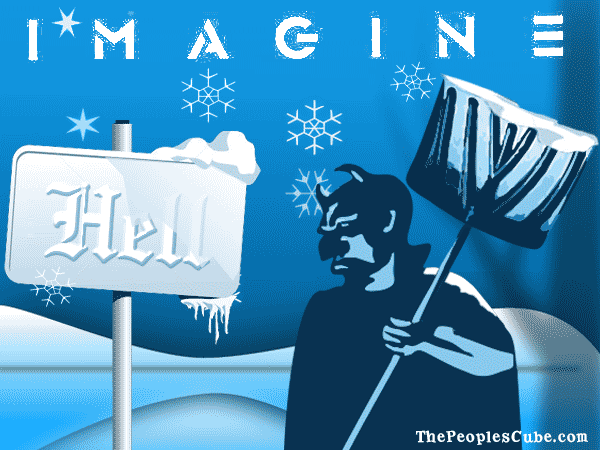 *We capitalize Hell because it's the name of a place. You know, like Washington, D.C. or Detroit.