Warning: mysqli_free_result() expects parameter 1 to be mysqli_result, bool given in /var/www/html/americanthinker/admin/common/functions/func.general.php on line 126
 Greenies and their twisted sense of risk - American Thinker
« Snowden on Russia spy charge: 'Absurd' | Target says no more insurance for part-time workers »
|

Greenies and their twisted sense of risk

One of the latest badges of greenie virtue is the mini-car. Supposedly, if you drive one of these contraptions, you demonstrate your concern for Mother Gaia and help diminish the risk that catastrophic global warming will engulf low lying coastal areas and fry the rest of us in temperatures that will be a couple of degrees higher in the next hundred years. In this worldview, people who drive around in SUVs are carelessly risking the very future of humanity.

That's quite a serious risk; never mind that temperatures have failed to rise for the last 16 years as the models at the core of the global warming scare predicted they would.

But is that perceived risk worth cramming yourself into one of these contraptions? And what about the risk of serious injury when one of these tiny vehicles encounters an obstacle? On that point we have genuine experimental data - you know, the kind of data that can be falsified, and which is therefore truly scientific. Cheryl Jensen of The New York Times reports:

A group of 11 minicars did the worst of any class of vehicles tested so far in the Insurance Institute for Highway Safety's newest and toughest trial, the small-overlap front crash test.

Of the 11 minicars tested, none achieved the institute's highest rating of Good. Only one - the Chevrolet Spark - achieved the next highest rating of Acceptable. The others received ratings of either Marginal or Poor, the lowest rating. The two worst-performing vehicles were the Honda Fit and the Fiat 500, although a completely redesigned Fit goes on sale this spring. (snip)

In both the Fiat 500 and the Fit, the driver's space was "seriously compromised" by the intruding structure, according to the report. The driver's door of the Fiat 500 opened after it tore apart at the hinges, increasing the risk of ejection.

In the Fit, Accent, Prius C and Yaris, the seatbelts allowed the crash test dummy to move too far forward, so the dummy's head barely contacted the front air bag and then slid off. This combination resulted in the head hitting the instrument panel. In eight vehicles, the side curtain air bag did not extend far enough forward to provide adequate head protection. In the Yaris, it did not deploy at all. 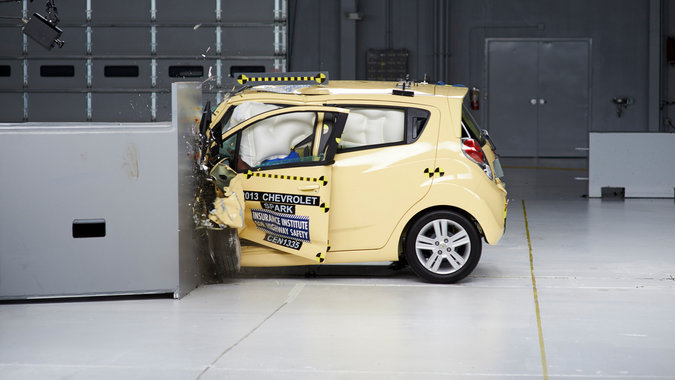 So, which is more likely: getting into a car crash or living long enough to see the hypothesized damaged of global warming? If you buy one of these risky cars, I suppose you are betting your life and those of your passengers on the latter.

My guess is that the buyers of these mini-cars are also the sort of people who buy organic food, and who shun GMO crops because of the perceived risks.