Warning: mysqli_free_result() expects parameter 1 to be mysqli_result, bool given in /var/www/html/americanthinker/admin/common/functions/func.general.php on line 126
 Cruz Grills Holder on IRS Scandal Investigation - American Thinker
« Not a word about Latin America in the SOTU | Michelle Obama Wore an 'a-what-a?' to the SOTU »
| 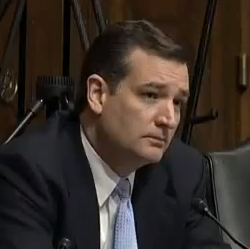 And, Cruz said, "most astonishingly, it has now been publicly reported that the lead lawyer heading the investigation was, No. 1, appointed from the civil rights division, which has historically been the most politically charged division in the Dept. of Justice. And even more astonishingly, is a major Democratic donor and donor to President Obama."

"Did you know the lawyer in charge of this investigation was a major Obama donor?" Cruz asked, referring to the involvement of Justice Department's trial lawyer Barbara Kay Bosserman in the probe.

In his trademark bland and evasive legalese, Holder attempted to deflect concern:

"The characterization of this lawyer as the lead lawyer on the case is not correct," Holder said, adding that "I don't know anything about the political activities of any of the people who are involved in this investigation."

Holder told the committee that he does not "have any basis to believe that the people who are engaged in this investigation are doing so in a way other than investigations are normally done."

"That is by looking at the facts, applying the law to those facts and reaching the appropriate conclusions," he said. "I don't have any basis to believe that anything other than that is occurring."

"No basis to believe" can be roughly translated as "I am averting my eyes."

Holder also stated that he sees no reason to appoint a Special Prosecutor (via Yourhoustonnews.com):

Sen. Cruz asks Attorney General Holder, "I would call upon you to carry out the tradition of independence that attorneys general have honored that office with for centuries and protect the integrity of the Department of Justice, given the political sensitivities, given the fact that individual citizens believe they are being persecuted by the Department of Justice for partisan reasons. It would further Justice and further the integrity of the Department of Justice for you to appoint a special prosecutor with a meaningful degree of independence to investigate and find out what happened, and I would suggest that any special prosecutor should have integrity beyond reproach, and not be a major Obama donor."

General Holder responded, "I don't think that there is a basis for us to conclude on the information as it presently exists that there is any reason for the appointment of the independent counsel...The notion that somehow this has caused a loss of faith in this Justice Department is inconsistent with the facts."

With the cooperation of the media, which regards lane closures on a bridge as more important than the suppression of political opposition by the federal government's most feared agency, Holder and his boss plan to run out the clock, simply delaying any real investigation. The facts of the lackluster investigation are damning on their face - few if any victims have yet been interviewed. Obama and Holder feigned outrage when the scandal came to light, and should be held to their words by every GOP politician.

It is time to demand -- over and over again -- a Special Prosecutor. If Cruz runs for president, he can make a promise to appoint a Special Prosecutor part of his platform -- assuming the IRS hasn't harrassed Tea Party groups out of existence by 2016.