A bipartisan Senate Intelligence Committee report on Benghazi has just been released, and it is worse news for Hillary Clinton than Bridgegate is for Chris Christie. Adam Goldman and Anne Gearan of the Washington Post report:

The bipartisan report lays out more than a dozen findings regarding the assaults on Sept. 11 and 12, 2012 on the diplomatic compound and a CIA annex in the Libyan city of Benghazi. It says the State Department failed to increase security at the sites despite warnings, and faults intelligence agencies for not sharing information about the existence of the CIA outpost with the U.S. military.

The committee determined that the U.S. military command in Africa didn't know about the CIA annex and didn't have the resources to defend the diplomatic compound in an emergency. (snip)

The report also notes, chillingly, that the FBI's investigation into the attacks has been hampered inside Libya, and that 15 people "supporting the investigation or otherwise helpful to the United States" have since been killed in Benghazi. The report says it is unclear whether those killings were related to the investigation. (snip)

The report says it was problematic that the CIA and State Department were not working out of the same facility together in the dangerous Benghazi environment. That meant the CIA and its well-trained contractors, who had served in elite U.S. forces, were not on location at the diplomatic outpost in case of a crisis.

There is a lot more that is going to come out. Senator Chambliss is speaking to Fox News, and we are promised further revelations. The State Department was repeatedly warned of 9/11 danger, and disregarded it. There were terrorist training bases affiliated with Al Qaeda established in Benghazi, according to a report by Catherine Herridge. And as already reported, wihin minutes, the Whitre House knew it was a terror attack, not a spontaneous demonstration.

Big Fur Hat has created a startling graphic that deserves to be plastered on bumpers, light poles, fences, and elsewhere visible all over the country. 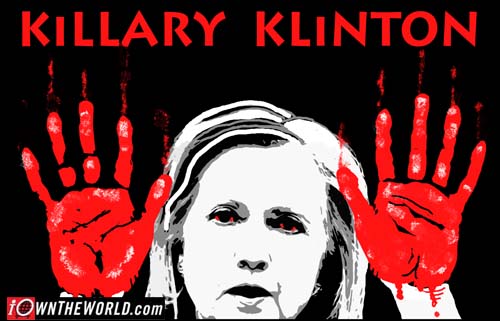