Yet another Obama bungle: Turkey

Barack Obama bet big on Turkey becoming an anchor of stability and democracy in the Middle East. And he is losing. As David Goldman writes at PJM:

Obama went out of his way to make Erdogan his principal pal in foreign policy. I have been ridiculing this notion for years, for example in this 2010 essay for Tablet.

As with nearly every other aspect of his Middle East policy, Obama is losing, big time. Turkey faces political and economic potential collapse. Goldman:

Turkey is coming apart. The Islamist coalition that crushed the secular military and political establishment-between Tayip Erdogan's ruling AK Party and the Islamist movement around Fethullah Gulen-has cracked. The Gulenists, who predominate in the security forces, have arrested the sons of top government ministers for helping Iran to launder money and circumvent sanctions, and ten members of Erdogan's cabinet have resigned. Turkey's currency is in free fall, and that's just the beginning of the country's troubles: about two-fifths of corporate debt is in foreign currencies, so the cost of servicing it jumps whenever the Turkish lira declines. Turkish stocks have crashed (and were down another 5% in dollar terms in early trading Friday). As the charts below illustrate, so much for Turkey's miracle economy. (snip) 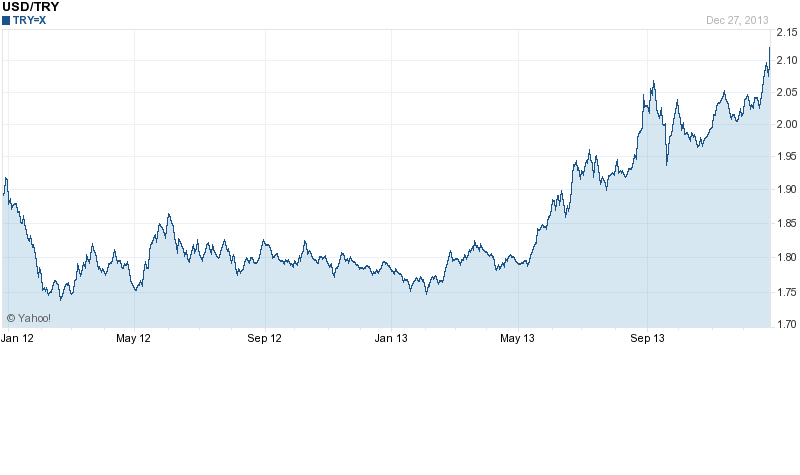 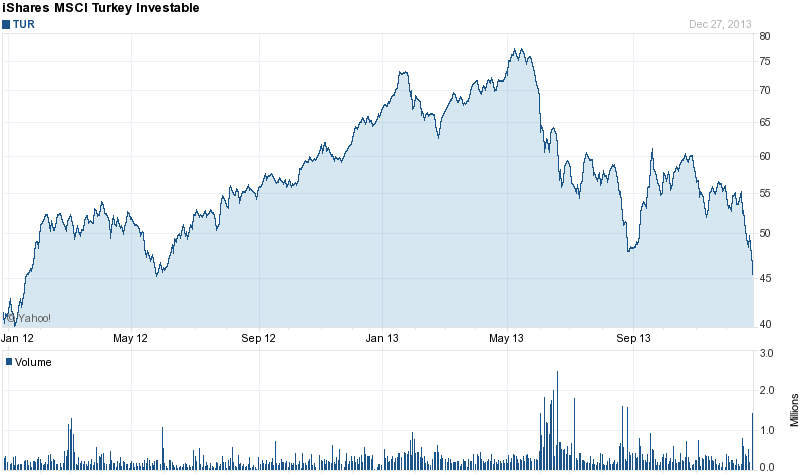 So, with Egypt, Saudi, and the Gulf states alienated and distrustful of the United States, with Israel, our bedrock ally, suspicious and fearful, the one relationship Obama has cultivated with Turkey is now subject to political and economic instability. In other words, the United States has forfeited its leading role in the Middle East. Even if Obama wasn't trying to hobble American power, he has done a damn good job of accomplishing that end by sheer incompetence.

In fairness, it was not only Obama who was mesmerized by the notion of a democratic, stable Muslim Turkey acting as a role model for the Middle Eastern and other Muslim countries. George W. Bush, always anxious to portray Islam as a "great religion," also placed a bet on Turkey. But Bush had other irons in the fire, with both Israel and the Gulf states, and don't forget that he left an American presence in Iraq, now abandoned by Obama. With Iran moving quickly to become a nuclear power, with Turkey playing footsie with the mullahs, and with nobody in the Middle East much trusting him, Obama has undercut American power and influence spectacularly effectively.

Goldman, who reads economic and demographic data closely, also observes that the future of Turkey contains a population time bomb:

Turkey was not in line to become an economic power of any kind: it lacked the people and skills to do anything better than medium-tech manufacturing. Its Islamists never were democrats. Worst of all, its demographics are as bad as Europe's. Ethnic Turks have a fertility rate close to 1.5 children per family, while the Kurdish minority is having 4 children per family. Within a generation half of Turkey's young men will come from families where Kurdish is the first language.

The Kurds have gotten screwed by everyone in the Middle East, with Turkey, Iraq, and Syria all holding on to substantial Kurdish minorities against their will. Given the flux of the Middle East, it is not unreasonable to expect that a push to establish an independent Kurdistan will intensify and maybe even have a chance of succeeding.

The image of a house of cards is not inappropriate. Unfortunately, when such houses fall, a lot of people get hurt. The consequences of a Middle East conflagration would be catastrophic for the entire world, dependent as we are on oil from that region. The one thing we can do is drill baby, drill. And thanks to the geniuses of the American oil industry who are perfecting fracking, we can survive if we take the appropriate steps now.