The man who created deaf communication Gangnam Style, Thamsanqa Jantjie, has stepped forward and admitted that he saw "angels" at the Nelson Mandela memorial at the FNB Stadium in Soweto.  Since the flap took place, in addition to being plagued with hallucinations, Thamsanqa admitted that his psychological history includes becoming violent "a lot," occasionally suffering from bouts of psychosis, and being hospitalized in a mental institution for over a year.

Surprisingly, the Mandela gig is not Mr. Jantjie's first job for the ANC.  In the past he has provided sign language at other gatherings, which means either Thamsanqa really does know what he's doing, or up until the Mandela memorial he only signed at events where no one was deaf.

After he was accused of being a fake, the organization that allegedly hired Mr. Jantjie, SA Interpreters, declined to comment on the controversy surrounding their employee.  Like Barack Obama's phantom college transcripts, since the commotion ensued, the SA Interpreter has gone missing.

Nonetheless, Thamsanqa Jantjie, the wigwagging deaf interpreter standing just three feet from Barack Obama, maintains that his sign-language interpretation of whatever the heck the US president was trying to convey was spot-on.

Thamsanqa did not say who was speaking at the time, but did disclose after the event that it was while he was signing that the "hallucinations began." Mr. Jantjie explained that at that point he had to work extra hard to maintain his composure, because he knew he was surrounded by armed policemen.

Struggling against hallucinations certainly explains why whatever Thamsanqa was doing with his arms while Obama was making South African history could have easily passed for either a South African version of Korean pop star Psy's famous dance, referee hand signals at a football game, or a ramper marshaling airplane traffic on a tarmac.

Sounding amazingly like Barack Obama off-Teleprompter, Thamsanqa had this to say about what took place:

What happened that day, I see angels come to the stadium ... I start realizing that the problem is here. And the problem, I don't know the attack of this problem, how will it come. Sometimes I get violent on that place. Sometimes I will see things chasing me.

Taking those words into consideration and bearing in mind the host of characters that were congregated in one arena, maybe Mr. Jantjie is more of a misunderstood John the Baptist than he is a schizophrenic.

Cara Loening, director of Sign Language Education and Development in Cape Town, begs to differ.  Ms. Loening called Thamsanqa "a complete fraud."  And that he may be, but onstage he was certainly near more than a few individuals afflicted with the same malady.

Ms. Loening said that instead of assisting those who were flapping their gums, the counterfeit servant of the deaf community was "flapping his arms."

Cara Loening also described Jantjie as looking like he was "trying to swat a few flies away from his face and his head." Ms. Loening may not realize it, but Barack Obama, a man who often doubles for human fly paper, was standing quite close to Thamsanqa, so the interpreter may have been dealing with actual flies. 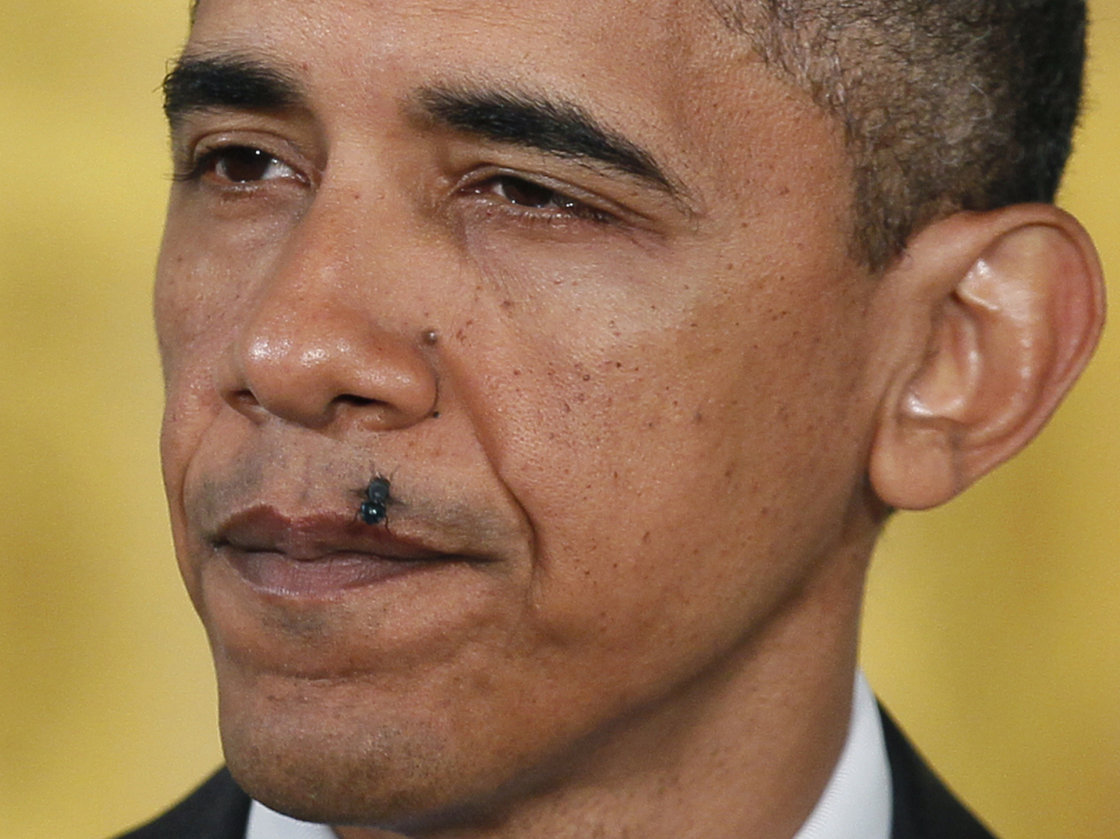 Nevertheless, Tham apologized for his psychotic break impinging upon a presentation that many sign-language experts have labeled "gibberish."

I was in a very difficult position. And remember those people, the president and everyone, they were armed, there was armed police around me. If I start panicking I'll start being a problem. I have to deal with this in a manner so that I mustn't embarrass my country.

Deputy Disability Minister Hendrietta Bogopane-Zulu apologized to the deaf community, but said there was no reason for the country to be embarrassed by Thamsanqa. Bogopane-Zulu maintained that "There are as many as a hundred sign language dialects."

Not only that, but even without Mr. Jantjie being dialect-challenged or introducing bizarre hand motions into the already disorganized event, outlandish behavior on the part of well-respected world leaders still would have transformed what was supposed to be a memorial to Nelson Mandela into what some are calling a global-dictator-handshaking/selfie-picture-taking "disgrace."

Firstly, I don't think South Africa as a country would put at risk anybody's security, especially those of heads of state. Secondly, when somebody provides a service of a sign language interpreter, I don't think... somebody would say: 'Is your head ok? Do you have any mental disability?' I think the focus was on: 'Are you able to sign? Can you provide the services?'

That makes sense, because that's the same amount of vetting that took place when America elected Barack Obama.

Mid-memorial, a large portion of the country realized that much like Mr. Jantjie's signing, the president's lips move, but nothing he says makes sense, nor has he delivered the services he was hired to provide.  Even more disturbing is his increasingly peculiar behavior, pathological lying, and narcissism, which indicate that he's likely afflicted with a whole host of other poorly-disguised mental conditions.