Warning: mysqli_free_result() expects parameter 1 to be mysqli_result, bool given in /var/www/html/americanthinker/admin/common/functions/func.general.php on line 126
 In order to claim progress, Feds finally admit how bad healthcare.gov was - American Thinker
« 1973: The day that Gerald Ford became VP | Obama admits to profiling! »
|

In order to claim progress, Feds finally admit how bad healthcare.gov was

Like someone who has been cheating on his diet but claims he is doing better because he only ate 6 double cheeseburgers with bacon last week, the Department of Health and Human Services is fessing up how bad the Obamacare website was, to demonstrate how much improvement there has been. Garance Franke-Ruta of The Atlantic lays it out:

...the Department of Health and Human Services released a report that detailed just how badly the site was functioning in October and early November. According to the Healthcare.gov Progress and Performance Report, the site was offline more than it was online in at the start of November: 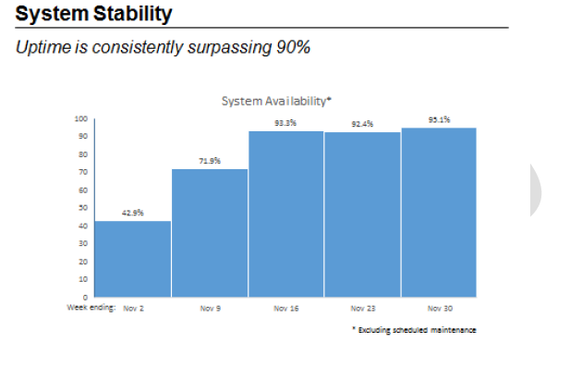 Zients said uptime in October was similar to what was seen in that first week of  November. That means that by the time President Obama spoke in the Rose Garden on October 21 to urge people to use a 1-800 number instead of Healthcare.gov, the site had been functionally offline the majority of the time during its first three weeks.

Uptime "the week ending November 2nd, was only 42.9 percent," Zients said. "In fact, that's what we think the system averaged through most of October as well."

People trying to use the site in October had an "unacceptable user experience marked by very slow response times, inexplicable error messages, and system outages," he said.

The most startling admission, however, is this:

Zients said his conclusion after studying the site in late October was that it needed a new management structure and approach, one "working with the speed and urgency of a high-performing private-sector tech company."

This constitutes an admission that government-sector work is inferior to that of the private sector. Which clearly implies that an expansive view of government's role is a mistake.  Thanks, Mr. Zients. When you become chairman of the White House National Economic Council in January, please let the president know that the private sector can do it cheaper and faster and better, so paring down the size of the federal government bureaucracy ought to be his priority.