« What does Mayor-elect DeBasio have against horses? | Conservatism and the Moral Calculus of Abortion »
|

From time immemorial, almost every little girl goes through a Barbie stage.  That's when happiness is measured by how many oddly-shaped dolls one can stuff into a big pink case.  The fascination with Barbie for most girls is the frilly clothes and the little plastic shoes and, of course, a romantic Ken doll that seems to always show up in his swimming trunks for some odd reason.

Little girls play age-appropriate pretend for hours, dressing and undressing their dolls while dreaming of one day marrying Ken and driving off in a hot pink sports car to live in a Barbie Dream House all their own. 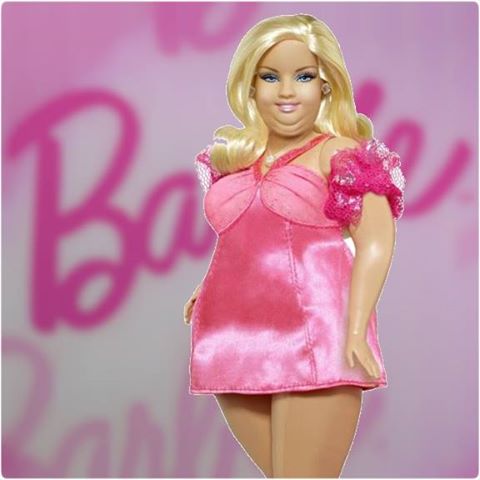 Now, after 54 years of angst-free Barbie doll playtime, liberals are at it again.  The same type of people with the twisted mindset that brought us Bebe Gloton, the baby doll that breastfeeds, are now insisting that Mattel make an "overweight" Barbie doll.

The argument coming from Plus-Size-Modeling.com is that slender, impossibly well-endowed Barbie dolls wreak havoc on the self-esteem of little girls.  Plus-Size-Modeling.com has to be a liberal organization, because they seem to think it's their job to point out, because we don't know, that a girl with Barbie's shape is a physically unattainable goal.

Anyway, aren't these supposed to be toys?  Don't we have enough reality in the disturbing world we live in right now?  Isn't imaginary Barbie land a childhood pastime that is with us for only a very short time in our lives?

If a little girl is even paying attention, which is doubtful, and if she's a little overweight, is a Barbie with cellulite going to make her feel better about herself?  And if a Barbie comes in a plus size, will she be a little chubby, obese, or morbidly obese?

One would think that giving girls a fat Barbie doll would be far worse for a child's self-esteem, especially if her skinny best friend has a Barbie in a bikini.  What?  Slim Sally gets the skinny Barbie in the two-piece bathing suit and, because she couldn't lay off the macaroni and cheese, chubby Charlotte gets the heavyset Barbie in the tent-sized muumuu?

Not only that, but what exactly will fat Barbie look like? Will she have a double chin, a muffin-top, and a triple-D bra size? Will Barbie have a backside so wide that the only thing little girls will be able to do is spend afternoons trying in vain to squeeze a size 16 doll into an old size 6 Barbie bridal gown?

So, instead of plastic jogging shoes or a tennis racket, does Rubenesque Barbie come with a teeny-tiny bag of Doritos and a miniature empty pint of Haagen-Dazs?

Honestly, not once in my vast Barbie doll experience did my favorite toy's hourglass figure and blonde hair upset my nine-year-old Italian brunette self-image.

Putting personal self-worth aside, the Plus-Size-Modeling.com proposal does present a whole host of scenarios to consider.

First of all, we have Michelle Obama pushing "Let's Move!" dance videos.  The first lady talks about pre-pubescent BMIs, and has removed cookies from lunch trays and posted calorie counts on vending machines.

It's a tad confusing for a kid to be rebuked by Mama Obama in one breath and then in the next be told to proudly proclaim her "I'm okay, you're okay" chubbiness by hauling around a doll that looks like Gwyneth Paltrow in "Shallow Hal."

Here's the question: are little girls supposed to feel good about themselves, or are they supposed to spend their time obsessing about weight?  Which is it? Because liberal busybodies seem to think they can have it both ways.

If Barbie dolls are plump, the message to little girls is that if you enjoy drinking that McDonald's Strawberry Shake, your Barbie doll should reflect your lack of self-control.  And where do we stop?  Why not make sure there's a Siamese twin Barbie, so conjoined twins feel like they fit in?  And to be fair, shouldn't Mattel market a "Little People, Big World" Barbie that looks like Amy Roloff, and a breast cancer Barbie that the toy company can manufacture with both a full or partial mastectomy?

How soon until the LGBT community demands a lesbian Barbie (questionable accessories not included) that's dressed like Ken, and a Ken that comes dressed like Barbie? Or a transgender Barbie that changes from Ken into Barbie and vice-versa whenever the mood strikes?

Has anyone considered muscular Marvel figures and hunky G.I. Joes?  Is having beefcake boy toys hurting the self-esteem of scrawny little guys who tie towels around their necks and fantasize about being a superhero?  Oh, that's right, liberals don't care because making boys feel humiliated and small is a good thing! Girls, however, are a different story.

In reality, most kids don't care what their toys look like; that's the beauty of make believe, and that's why it's better to just leave well enough alone.

It's when the liberal, level-the-playing-field mentality inserts itself into places it doesn't belong that we find ourselves arguing whether fairness now requires marketing a sexually-conflicted Biggest Loser Barbie with ADHD and gluten sensitivity.