Warning: mysqli_free_result() expects parameter 1 to be mysqli_result, bool given in /var/www/html/americanthinker/admin/common/functions/func.general.php on line 126
 The ObamaCare lie and the global warming lie - American Thinker
« Lose Insurance Under Obamacare, Speak Up, IRS Audits You | It's another 'Wait 'til next year' for key Obamacare program »
|

The ObamaCare lie and the global warming lie

Now that Americans have largely caught on that their government will lie to them to support the expansion of state power, America's progressives are in for a rough time ahead, according to Peter Ferrara, writing at Forbes.

The second shoe is preparing to drop to shatter the world view of so-called Progressives.  Coming, global revelations will demonstrate the fraud behind the theory of man-caused, catastrophic, global warming, just like the real world has shattered the falsehoods behind Obamacare.

That is because the underlying reason for both frauds was the same: to expand government power.  Enablers went along with the fraud in both cases for the same underlying reason - political correctness.  In both cases, going along with the cause for the assumed public good without raising questions was considered the politically correct thing to do for all "good" people.  Soon the enablers in both cases will have to pay the price for participating in and perpetuating the fraud.

Drawing on the work of S. Fred Singer and other leading global warming skeptics who have shown that the actual temperature evidence is contradicting the warmist hypothesis, Ferrara makes a fascinating comparison to other scientific frauds perpetrated in the name of enhancing state power. Quoting the eminent MIT atmospheric sciences professor emeritus Richard Lindzen:

"Global climate alarmism has been costly to society, and it has the potential to be vastly more costly.  It also has been damaging to science, as scientists adjust both data and even theory to accommodate politically correct positions.  How can one escape from the Iron Triangle (ambiguous statements from scientists translated into alarmism by advocates and the media, with politicians responding by feeding the scientists taxpayer money) when it produces flawed science that is enormously influential and is forcing catastrophic public policy.

There are past examples.  In the U.S. in the early 20th century, the eugenics movement had coopted the science of human genetics and was driving a political agenda.  The movement achieved the Immigration Restriction Act of 1923, as well as forced sterilization laws in several states.  The movement became discredited by Nazi atrocities, but the American consequences survived well into the 1960s.

In the Soviet Union, Trofim Denisovich Lysenko (1898-1976) promoted the Lamarckian view of the inheritance of acquired characteristics.  It fit with Stalin's megalomaniacal insistence on the ability of society to remold nature....However, opposition within the Soviet Union remained strong, despite ruthless attempts to suppress dissenters....

Global warming differs from the previous two affairs.  Global warming has become a religion.  A surprisingly large number of people seem to have concluded that all that gives meaning to their lives is the belief that they are saving the planet by paying attention to their carbon footprint.  There may be a growing realization that this may not add that much meaning to one's life, but outside the pages of the Wall Street Journal, this has not been widely promulgated, and people with no other source of meaning will defend their religion with jihadist zeal.

In contrast to Lysenkoism, Global Warming has a global constituency, and has successfully coopted almost all of institutional science.  However, the cracks in the scientific claims for catastrophic warming are, I think, becoming much harder for the supporters to defend."

We shall see. Having witnessed the ability of progressives to believe demonstrable falsehoods for decade after decade, I am not quite so optimistic that the scales will fall from their eyes. On the other hand, the graph below, comparing warmist predictions with actual results shows that the gap is getting bigger and bigger, to the point where laughter is the only sane response. 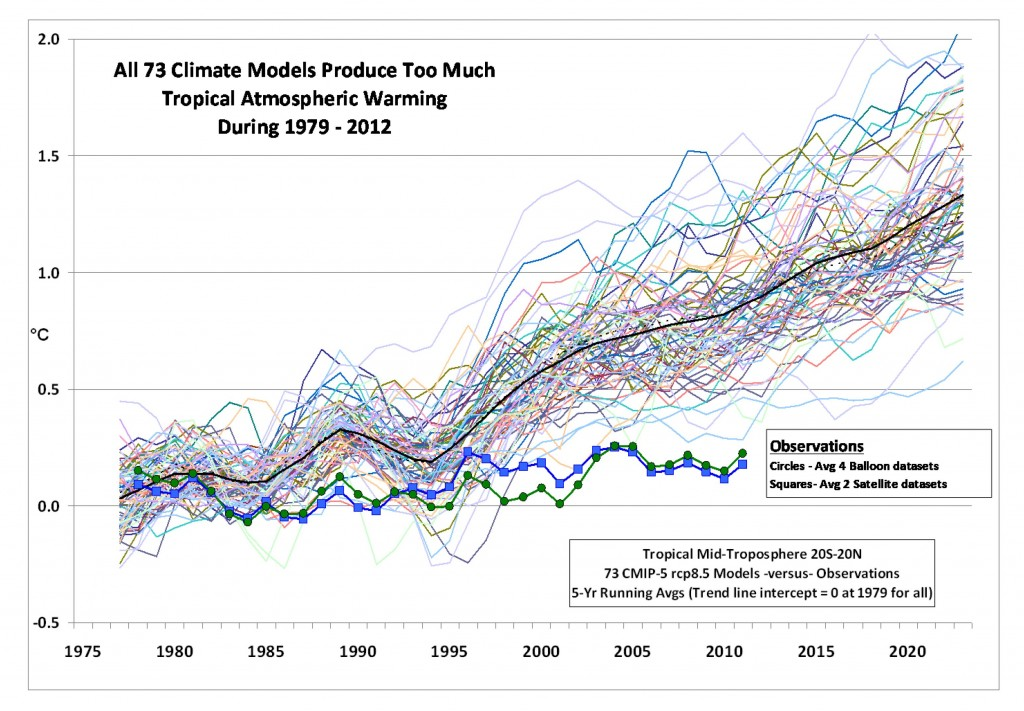 Menawhile, China, India, and other competitors of the warmist-obsessed Western democracies are forging ahead, unencumbered by carbon taxes. The resulting economic pain is causing a backlash in Britain, Australia, and other countries that have hobbled their industries.

I do think that Ferrara is correct in positing that the realization that statists lie is a gateway to skepticism across the board. ObamaCare may be the gateway drug for skepticism on governmental overreach.