Warning: mysqli_free_result() expects parameter 1 to be mysqli_result, bool given in /var/www/html/americanthinker/admin/common/functions/func.general.php on line 126
 Peak Per Capita Government Revenues: Real Austerity Is Inevitable - American Thinker
« Another Runaway Roaring Down the ObamaCare Tunnel | ObamaCare finds its Level »
|

To those with even basic historical knowledge, the recent increases in government spending are unsustainable.  The rising debt of the USA -- and its fellow nations in the West -- is residing under the illusion of continued low long-term interest rates.  Current low interest rates minimize interest payments on government debt, but they are unlikely to last.

For a graphical reinforcement, consider the following chart created by Louise Yamada Technical Research Advisors, and published by CNBC/Yahoo, showing US interest rates from 1790 up to the present. 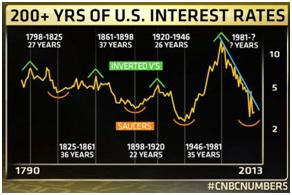 According to Yamada's research, "the average [interest] rate has been 5.18% since the start of [the United States'] history."  The current low interest rate period is the second-lowest in over 220 years, and well below the historical average.

Of great concern is that the USA appears to be moving into a period of structural federal deficits.  The following chart shows per capita federal government receipts and outlays in constant dollar terms since 1960. 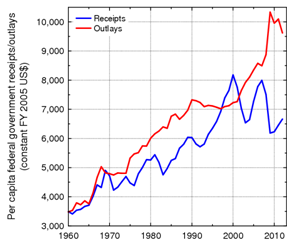 After all, we also saw temporary declines in real per capita federal government outlays during the late 1960s/early 1970s and the early to mid-1990s before they began periods of long-term rapid rise.  The "peak federal receipts" concept appears to be far more solid.  Between 1960 and 2007, there was never a 13-year period where constant dollar per capita federal government receipts saw a net decline.

This peak revenues phenomenon is not unique to the federal government, nor to the USA.  When we consider per capita general government revenues in constant 2005 international dollars on a purchasing power parity (PPP) basis among the G7, only Germany does not appear to have reached some form of revenue peak.

With the exception of Italy, the corresponding real per capita general government expenditure trends have not flatlined or exhibited any form of a long-term decline in an attempt to match up with revenue trends.  Of course, Italy's general expenditures still exceed those of general revenues (as they have every year since the dataset begins in 1988), but its current per capita annual general government deficit -- even at the peak of the recent financial crisis -- is far lower (by two- to threefold) than it was in the late 1980s and early 1990s.

True austerity -- a long-term and continuous decline in real dollar per capita government expenditures -- is inevitable.  A debt-induced financial Judgment Day in the West will be greatly hastened should interest rates return to historical norms, and this must be avoided.  Thus, for major Western economies to continue to pretend that high levels of government spending can be maintained (or even expanded) is both naive and irresponsible, and it ignores the lessons of economic history.  In order to balance the books, many nations may need to return to constant dollar government spending levels last seen one or decades ago -- possibly even farther back.  Stabilization of spending growth, or even the small spending declines some countries have seen over the past few years, may not be sufficient if peak government revenues has been reached -- and, indeed, passed.