Warning: mysqli_free_result() expects parameter 1 to be mysqli_result, bool given in /var/www/html/americanthinker/admin/common/functions/func.general.php on line 126
 Pay 41% More and Get Less from Obamacare - American Thinker
« White House blames the victim of Obamacare regs | Goodbye to the Undue Burden Voter ID argument »
|

Pay 41% More and Get Less from Obamacare

The Manhattan Institute just published an analysis of the ObamaCare individual policy insurance rates demonstrating the average cost will rise by 41% next year. The results are very similar to the 2009 PricewaterhouseCoopers analysis that predicted insurance rates would rise by 47%. The biggest hikes will hit the young people, where rates will jump by an average of 98% for men and 58% for women. Insurance rates will also increase for everyone who is healthy and for all males. ObamaCare's taxpayer-funded subsidies will primarily benefit those approaching retirement, despite substantially higher average net worth compared to the young. The real winners under ObamaCare are huge insurance companies and HMOs whose stock prices have gone up twice as fast as the market, since ObamaCare kills competition and creates monopolistic profits. 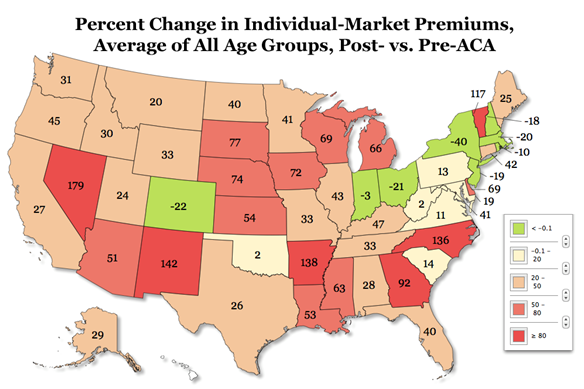 National insurance companies are exempt from federal anti-trust supervision under ObamaCare; whereas manufacturing, transportation, and service companies are prevented from unfair competition in the markets.

According to the NY Times:

Of the roughly 2,500 counties served by the federal exchanges, more than half, or 58 percent, have plans offered by just one or two insurance carriers, according to an analysis by The Times of county-level data provided by the Department of Health and Human Services. In about 530 counties, only a single insurer is participating.

ObamaCare promised to set fair-pricing rates for medical providers so that insured patients would not continue to pay higher rates to subsidize Medicaid and the uninsured patients. Doctor fees are being standardized under new "fair-pricing" rules, but the administration exempted politically powerful hospitals that will continue to charge different rates without considerations of different quality of care.

ObamaCare also supposed to reduce prescription drug spending, but the Pharmaceutical Research and Manufacturers of Americain 2009 saw the Affordable Care Act as a windfall when it add another 25 million people to Medicaid. The drug lobbying group agreed with the White House to sponsor a $150 million advertising campaign to drum up support for passing the ObamaCare legislation.

Prior to ObamaCare, government regulation made the United States the most expensive per person healthcare of any country on earth, while only barely ranking in the top 25% of male and female life expectancy. The CDC Health-Related Quality of Life surveillance data reveals that Americans report feeling unhealthy about six days per month. Adults with the lowest level of income or education reported more unhealthy days per month compared to adults with higher levels of income or education. The biggest factor for feeling unhealthy is that approximately one-third of all Americans reportsuffering from some form of mental or emotional problem every month.

The major cause of death in U.S. adults over the age of 65 is cardiovascular disease, cancer, and chronic lower respiratory diseases. All other age group major causes are accidents, homicide, and suicide. Seventy-five percent of America's health expenditures are attributable to chronic diseases and two-thirds of spending over the last 25 years is attributable to the rise in chronic diseases. As the U.S. population continues to grow older, the incidence of chronic disease is expected to increase, since 60% of individuals age 65 or older will be managing more than one chronic condition.

Obesity and sleep deprivation are leading factor in the onset of most chronic conditions and are associated with higher medical costs and a lower quality of life. Approximately 72.5 million adults are obese and 25% of U.S. adults reported having insufficient sleep or rest at least half of the days per month.

Nothing in the ObamaCare will improve any of these statistics. According to "The Scourge of Obamacare" by the Institute of Economic Affairs:

"The new law is fundamentally anti-competitive and anti-small business, riddled with onerous regulations and handouts to favored corporations. As usual, the relationship between big business and big government is not one of rivalry, but of symbiosis, routing genuine free markets in favor of collusion."

ObamaCare is rapidly becoming the most contentious political action since the Vietnam War, because it personally touches every American. We already knew that the software driving ObamaCare was a disaster and now we know that the steep costs are also a disaster. But my biggest concern is that ObamaCare is designed to provide healthy profits to giant corporations at the expense and wellbeing of most Americans.