Two recent incidents have caused many people, including blogger Elizabeth Scalia, to suggest that people stop tipping with cash, in order to prevent being falsely accused of a hate crime. In the first incident, a Red Lobster waitress in Tennessee posted a copy of a credit card receipt containing no tip but with the n-word to her Facebook page, and it went viral. Many bought into her story, including the website Opposing Views: 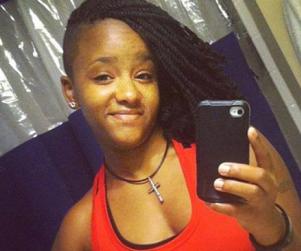 A waitress at a Red Lobster restaurant in Tennessee allegedly got one of the worst tips ever from a couple of racist customers. Toni Christina Jenkins, 19, was working her shift when she went to collect the payment from a couple of customers who had racked up a $45 bill. In the tip section of the receipt they had apparently written "none ni**er."

After the incident, Jenkins went on Facebook to vent about what had happened. She also posted a photo of the racist receipt. "This is what I got as a tip last night...so happy to live in the proud southern states..God Bless America, land of the free and home of the low class racists of Tennessee," Jenkins wrote. 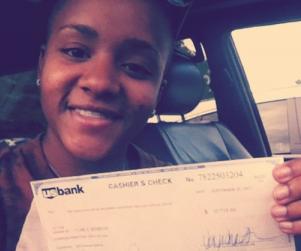 So great was the outpouring of support that Jenkins received over $10,000 in donations (see her proudly posing with the check at left.)

The problem is that the alleged racist, Devin Barnes, strongly denied it. Opposing Views, again:

Barnes flatly denies that he added the "N-word" to the receipt. And his attorney hired a handwriting expert to prove it.

"A lot of people on the Internet who I don't know are calling me a racist, and I'm thinking people have their own opinion, but I know I am not a racist," Barnes said. "I don't see color. I have many mixed color friends."

In a note written after the story went national, Barnes said, "I do not approve of the use of that type of talk, not now or ever."

He says that he and his wife have been subject to threats and harassment since his name went public in connection with the story.

"No one should go through this at all," Barnes said.

The handwriting expert found no match between Barnes' handwriting, seen on a note written by him below, and the writing of whoever wrote the offending term on the receipt. Barnes acknowledges being a lousy tipper. He said he wrote "none" on the tip line when he and his wife had to leave in a hurry and switched their order to take-out.

The handwriting expert also ruled out Barnes' wife as the writer of the word.

Then, a second handwriting analyst, hired by the conservative news web site The Daily Caller, examined the receipt and concluded that Jenkins herself was the perpetrator of a hoax.

"I believe within a reasonable degree of certainty that the waitress actually wrote the word," forensic handwriting expert Bob Baier told the Daily Caller, citing similarities in Jenkins' handwriting and the word on the receipt.

The handwriting analysis is not definitive. But in another alleged incident of hate non-tipping, the evidence is conclusive. Gothamist reports:

Right after a receipt and credit card statement suggested a NJ server's tale about bigoted customers was a hoax, a local newspaper from her hometown started digging into her past. And now the Journal News reportsthat Dayna Morales, "has a reputation for lying," according to former colleagues and friends.

People were rallying around Morales and sending her tips after she shared a photograph of a receipt she got back at her work, NJ restaurant Asian Gallop Bistro. The receipt showed no tip, with the note, "I'm sorry but I cannot tip because I do not agree with your lifestyle and how you live your life." But then the family came forward saying that they actually did leave a tip, showing their copy of the receipt and a credit card statementthat suggested they were truthful.

According to the Journal News, Morales lied about having cancer, her military service and damage to her home during Hurricane Sandy. 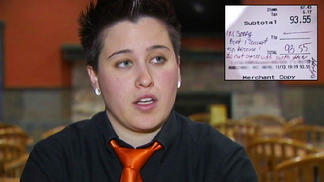 After a gay server at a New Jersey restaurant said a customer denied her a tip and wrote her a hateful note on the receipt, a local family contacted NBC 4 New York and said their receipt shows they paid a tip and didn't write any such note.

Dayna Morales, a former Marine and a server at Gallop Asian Bistro in Bridgewater, posted a photo on Facebook earlier this month, showing the bill with a line through the space for a tip. The photo of the receipt showed someone had written, "I'm sorry but I cannot tip because I do not agree with your lifestyle." (snip)

But a family contacted NBC 4 New York claiming their receipt from the restaurant shows they did leave a tip, and provided what they said was a credit card statement as proof.

The husband and wife, who asked to remain anonymous, showed NBC 4 New York a receipt that appeared to be printed at the same minute, on the same date, for the same $93.55 total, except with an $18 tip.

They also provided a document they said was a Visa bill, which appears to indicate their card was charged for the meal plus the tip, for a total of $111.55.

The couple told NBC 4 New York that they believed their receipt was used for a hoax. The wife says she is left-handed and could not have made the slash in the tip line, which she said looks to be drawn from the right.

So, if you want to avoid being falsely accused of stiffing on a tip and committing a hate crime, always put the tip on your credit card. And save your receipts and credit card bills.

Sad, but a sign of the hate crime-obsessed times in which we live.

The big winner is the IRS, which wants a record of all tips so that wait staff can be fully taxed.