Majority Leader Harry Reid and President Barack Obama rallied 52 Democrats and independents to vote to weaken 224 years of protection of minority rights in the Senate by eliminating the filibuster. Now only 51 votes, rather than 60, are required for Senate approval of executive and judicial branch nominees. Complaining that Republican intransigence drove him to use the "Nuclear Option", Reid argued, "There are currently 75 executive branch nominations ready to be confirmed by the Senate," he said, "waiting an average of 140 days." But Republican Senator Susan Collins responded, "I think the minority will rue the day that they broke the rules to change the rules."

Democrats were not always so willing to lecture America on how "Majority Rule" would be good for us. After Democrats won control of the Senate in 2006, Reid promised: 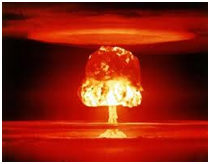 "As majority leader, I intend to run the Senate with respect for the rules and for the minority rights the rules protect. The Senate was not established to be efficient. Sometimes the rules get in the way of efficiency. The Senate was established to make sure that minorities are protected. Majorities can always protect themselves, but minorities cannot. That is what the Senate is all about. For more than 200 years, the rules of the Senate have protected the American people, and rightfully so. The need to muster 60 votes in order to terminate Senate debate naturally frustrates the majority and oftentimes the minority. I am sure it will frustrate me when I assume the office of majority leader in a few weeks. But I recognize this requirement is a tool that serves the long-term interest of the Senate and the American people and our country." (Congressional Record, S.11591, 12/8/06)

I am deeply disappointed with the Supreme Court's decision today. For nearly 50 years, the Voting Rights Act -- enacted and repeatedly renewed by wide bipartisan majorities in Congress -- has helped secure the right to vote for millions of Americans. Today's decision invalidating one of its core provisions upsets decades of well-established practices that help make sure voting is fair."

Today might have given the President and his majority of allies in the Senate a political victory, but as William Hazlitt said: "The only vice that cannot be forgiven is hypocrisy. The repentance of a hypocrite is itself hypocrisy."