Don't know much about history (updated with university response)

As Clarice Feldman observed, "must be a great American History Department there" if they believe that Abraham Lincoln was a Democrat.

I have no information about how long the plaque has been in place, but the fact that nobody realized the gravity of the error is damning in and of itself. This is laugh out loud moronic.

At the very top of its website home page, NEIU brags that 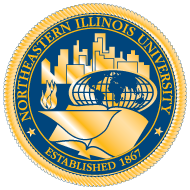 In its annual publication of "Best Colleges," U.S. News & World Report announced that Northeastern Illinois University is one of the most ethnically diverse universities in the nation, a distinction Northeastern has held since 1997.

Thus, the damage being done by the fools there is spread among all racial groups, presumably.

Why on earth would one identify Honest Abe by political party, as opposed to, say, president during the Civil War or author of the Emancipation Proclamation, to begin with. Getting his political party 180 degreees wrong just puts icing on the cake of ignorance. The taxpayers of Illinois, not the mention the 12,000 students at NEIU deserve far better. But since they are government workers, nobody will be fired, or even penalized, almost certainly.

I asked the university about this plaque and this is their ludicrous response:

Hi Clarice, The Carruthers Center for Inner City Studies at Northeastern Illinois University is housed in a building that bears historical significance. From time to time, the integrity of a plaque honoring the memory of Abraham Lincoln is questioned. Installed in the building for its opening in 1905, the plaque includes an inscription of the word "democrat" following Abraham Lincoln's name. According to building archives, the word democrat was used because Lincoln was an advocate for democracy-the political or social equality of all people. The word was not chosen to reflect a political affiliation.