Did Obama ask Oprah to play the race card?

We know that President Obama is desperate because he has lost the trust of the American people. A majority, according to some polls, believe he deliberately lied about keeping your insurance and doctor. Once the majority doubt his word, all sorts of other ugly questions start getting raised about other claims he has made - about himself, about the country, about the GOP, really, about everything that has come out of his mouth.

When in crisis, the habitual trump card of race gets played. And who better to play it than Oprah Winfrey, who is loved and trusted, especially by the female demographic that provides Democrats their winning margin. If only men 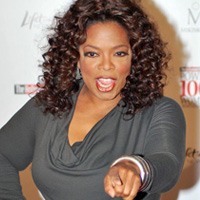 voted, there would be no Democrats in the Oval Office.

So, using the platform of the BBC, Oprah said: (video here)

There's a level of disrespect for the office that occurs. And that occurs in some cases and maybe even many cases because he's African American. There's no question about that and it's the kind of thing nobody ever says but everybody's thinking it.

Apparently Oprah Winfrey was asleep during the two terms of George W. Bush, when "disrespect" was the mainstay of the American left, with Hitler moustaches placed on Bush's face, and he was likened to a chimp with great regularity. The "disrespect" shown Obama has taken a long time to appear. Apparently Oprah has forgotten the halo placed around him by the emdia, and the very high levels of support he enjoyed after his first inauguration - in the 70 percent range, for crying out loud. Those numbers have crashed because of Obama's behavior, not because of racism.

Richard Baehr writes to me:

I am convinced that Oprah's it-is-all-racism complaint was made because Obama put her up to it. Besieged on all sides, this is what he has left to give him some breathing room. Charles blow and others were quick to pick up on it

There are scholarly papers -- serious ones -- that suggest that Oprah's support for Obama drove enough white women (her largest fan base) away from Clinton, to get Obama nominated in 2008.  The estimate is one million. The two had the same total popular votes in 2008 -- Clinton a bit  more in primary states, and Obama with more from the caucus states, winning all but Nevada.

Oprah has crossed a line here, and I don't think she will ever recover her popularity with the same number of people who once enjoyed her show, or her flailing cable network. Americans legitimately worried and angry over losing their doctors and their health insurance are not going to take kindly to being called racists.