« EPA's 'unprecedented' power grab for private property | Can a man who thinks he's a woman get a mammogram at Planned Parenthood? »
|

I had to wipe the sleep out of my eyes and do a double take when I read this at Reason.com this morning:

When Congress saved America from the perilous clutches of a federal government compelled to live within its means without running up the credit card, it came up with a doozy of a deal. From now until February 7, 2014, the U.S. Department of the Treasury can borrow as much as it pleases. Jack Lew and company aren't wasting any time letting their freak flags fly. From October 16 to October 17 (that's overnight, for the calendar-challenged), public debt outstanding jumped $328 billion, from $16.747 trillion to $17.076 trillion. Fast work, folks!

The Treasury Department's online calculator runs from January 1, 1993, when public debt outstanding was $4.168 trillion, to the present day. The debt broke $10 trillion on September 30, 2008, and has jumped over seven trillion dollars since then. Despite all the quibbling over the federal budget and "reducing deficits," any deficit adds to the total owed. The tally of debt has risen in an almost unbroken line the entire time.

Absolutely astonishing, as the graph below makes clear. 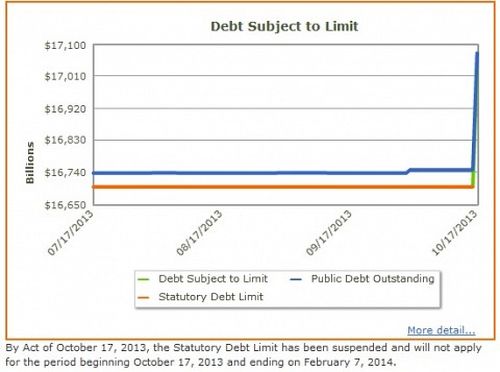 To be clear, that $328 billion has already been appropriated - approved by Congress - so it's not new spending. Still, the Treasury Department sure has gotten the new fiscal year off to a bang of a start, eh?