Warning: mysqli_free_result() expects parameter 1 to be mysqli_result, bool given in /var/www/html/americanthinker/admin/common/functions/func.general.php on line 126
 Things Fall Apart for Obama - American Thinker
« GOP rep supports Syria strike but can't get the White House to call him back | Kerry gives Assad one week to surrender chemical weapons or face attack »
|

It's so bad for President Obama that there is now talk of impeachment, not from his foes on the right but from his former allies on the left, if he proceeds with an attack on Syria absent Congressional approval. Dennis Kucinich kicked off the talk late last month with a tweet: 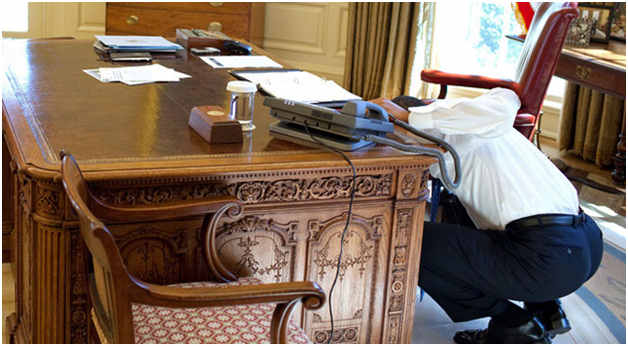 But yesterday it got serious, as prominent blacks intellectual leaders took up the theme. From Buzzfeed:

"It doesn't make sense to commit more war crimes," Cornel West said Sunday on the syndicated radio show Smiley and West, to an approving response from host Tavis Smiley, who has also been consistently critical of Obama. (snip)

"It would be an illegal war. It would be an immoral war for the United States to begin bombing and sending missiles to Syria and killing more innocent people," said West, who is a professor of philosophy at Princeton University.

Later in the discussion of Syria, Smiley said: "If the President doesn't get the vote that he wants... then I hope he has more sense then to go ahead anyway. But you used the phrase 'dictatorial' - and that's exactly what it would be."

"You would think in some ways grounds for impeachment," replied West.

As Fay Voshell noted today on AT, the Huffington Post has taken up the theme of Obama administration corruption.

If Obama continues to flounder, as I expect, the media cofferdam around the less savory aspects of his past may be breached, and all sorts of awkward questions relating to his background, including the financing of his higher education by a Saudi, as alleged by the former Borough President of Manhattan (a black Democrat) may come to the fore, considering that he is proposing intervention on behalf of the side supported by the Saudis in Syria.