Warning: mysqli_free_result() expects parameter 1 to be mysqli_result, bool given in /var/www/html/americanthinker/admin/common/functions/func.general.php on line 126
 Swindler tied to Hillary Clinton and Barack Obama sentenced to 12.5 years in prison - American Thinker
« McCain publishes opinion piece in Pravda.ru | Why shouldn't the GOP stop an extremely unpopular law? »
|

Swindler tied to Hillary Clinton and Barack Obama sentenced to 12.5 years in prison

You've probably never heard of Claudio Osorio, and that's just fine with the liberal media establishment. But he is emblematic of the new culture of corruption that has overtaken American politics, combining political influence, government grants, lavish lifestyles and a dollop of technology razzle-dazzle.  Yesterday, Osario was sentenced to 12.5 years in federal prison for a massive fraud he committed.

Jay Weaver of the Miami Herald writes (in the local Miami-Dade section of his paper):

According to an indictment, Osorio conspired to fleece $40 million from 10 investors and an additional $10 million from a federal government program between 2006 and 2011. The government grant was for building 500 homes in Haiti after its devastating earthquake in January 2010.

The lure of government money apparently is sufficient to attract investors. In this case, Osorio shipped some of their money out of the country, to the Cayman Islands, engaging in wire fraud.

Three hundred and thirty words into the article, readers of the local news section of the Miami Herald are treated to this little revelation:

Osorio, a Venezuela-born entrepreneur, and his wife once hosted fund-raisers in their Star Island waterfront home for presidential candidates Hillary Clinton and Barack Obama. 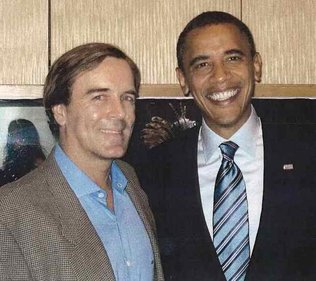 Nothing like a picture of a businessman with high powered politicians to assure investors that the money will keep flowing in.

The defrauded investors are not going to get much back. Osorio's 12.7 million dollar waterfront home on Star Island was sold, but it was so heavily mortgaged that only 3.4  million diollars was realized to pay back investors. And the money in the Cayman Islands is MIA. And of course, you can forget about the Hillary or Barack campaigns coughing up any of their lucre.

Another day, another crony crook. Welcome to the new gilded age.