Warning: mysqli_free_result() expects parameter 1 to be mysqli_result, bool given in /var/www/html/americanthinker/admin/common/functions/func.general.php on line 126
 Sharing Asia Is Not an Option - American Thinker
« Regarding Ecstasy at the Electric Zoo | Why can't the community organizer organize a community? »
|

Sharing Asia Is Not an Option

Since the end of World War II, the United States has been the dominant external military power and economic influence in Asia and the South Pacific.  With the rise of China, some allies -- notably Australia -- are feeling a strengthening tug-of-war between great powers.  This has led some to propose that America "share" Asia with China.  Such would be a foolhardy strategy that would threaten the core of Western civilization and the freedoms we enjoy.

Two charts can illustrate the folly in sharing Asia with the communist police state of China.  The first shows the share of global GDP for this region compared to that of the USA.  The second chart provides military spending data for the same players. 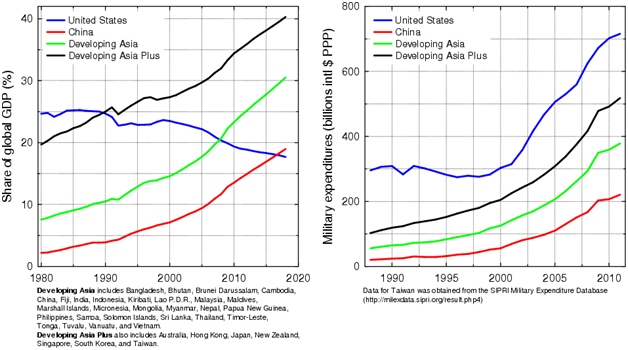 In 1988, American military expenditures were almost 15-fold higher than China's.  As of 2011, they were barely three times as great, and the gap was shrinking rapidly.  Twenty-five years ago, the USA spent five times more on its armed forces than all of developing Asia.  Now the difference is less than a factor of two.  Over this two-and-a-half-decade-long timeframe, the spending difference between the USA and developing Asia Plus declined from a factor of three to less than 40%.

Great powers also cannot dictate the terms of their geopolitical retreat, and proposing to share what you have long dominated equates to a retreat.  Once the ball is rolling backward, it is difficult to manage.  Intending -- and communicating this intention -- to share Asia with China may result in a confident great power adversary that takes all of Asia for itself.  With Asia under its domination, China would be able to marshal sufficient economic and -- by extension -- military resources to threaten the West's homelands.

The choice moving forward is a difficult one.  The economic pressures on the USA are intense and real, but when dealing with potentially existential threats to freedom, moving backward only hastens the ultimate defeat.  Rather than a tentative pivot to Asia, America needs to go "all in" and move with clear, determined, and forceful economic and (if required) military intentions in the Asian region as the first few decades of the 21st century unfold.

Many ridicule the continuance of Cold War-era thinking.  Such ridicule is naive and utopian.  History teaches us that the absence of great power rivalries is an anomaly, not the norm, and that these recurring contests are often heated, either with total war or the type of proxy conflicts we saw against the USSR.

Cold War 2.0 is upon us.  Only those with wishful thinking can deny it.  The question before the West is whether we rise to the challenge, or go meekly into the historical record as another democratic civilization that ultimately failed.