How much of a mess has Obama made of the Middle East? The following two maps tell the story, five years ago versus today. (Maps courtesy Martin Weiss, Weiss Research)

As you can see, five years ago, the Middle East was mostly stable, with theocracies and military dictatorships prevalent, paid for with piles of U.S. taxpayer dough: 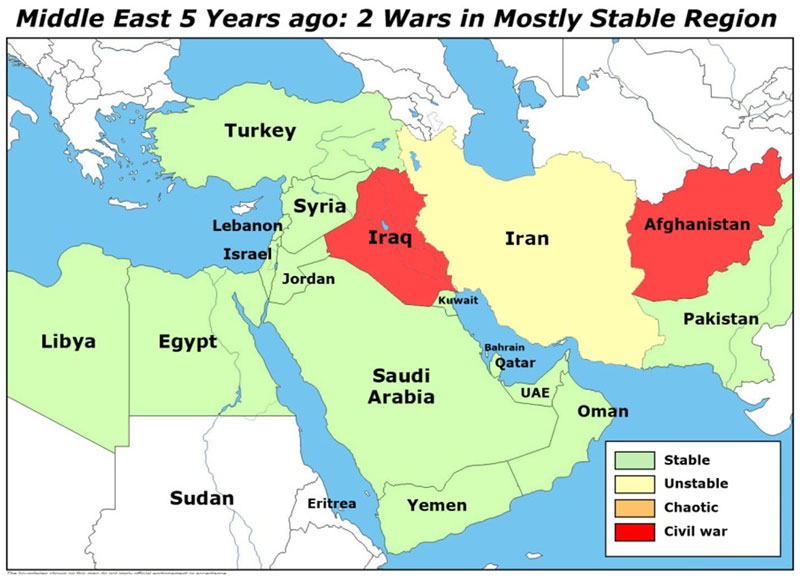 Today, after U.S. official and media support of a misbegotten "Arab Spring" uprising (my heart goes out to the democratic secularists in these countries, but they are a distinct minority) and sucking up to the Muslim Brotherhood, the Obama administration has given us a political Middle East that looks like this: 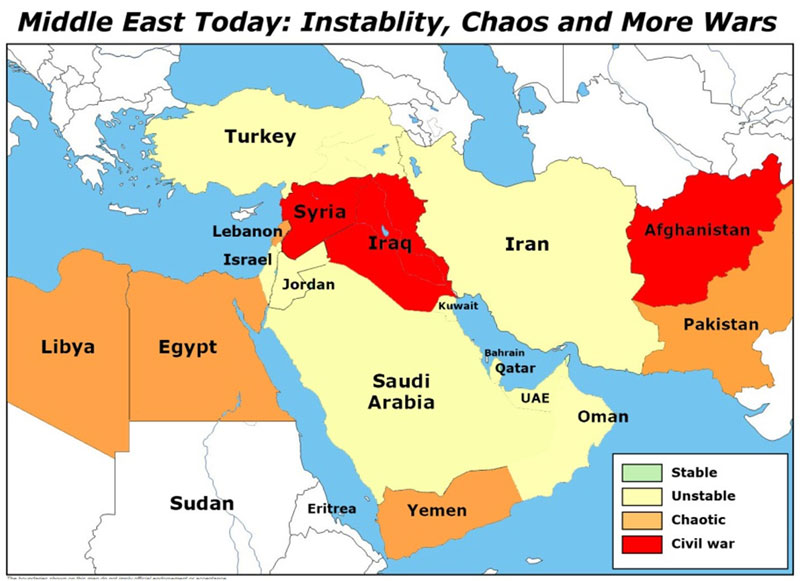 With the stabilizing influence of a coherent U.S. foreign policy for the Middle East now gone AWOL, the countries are devolving into a Sunni-versus-Shia religious war over who will control the caliphate-to-be. Note that the countries that are chaotic or in civil war mostly have substantial numbers of each sect, as you can see in the map below (source: CIA, 1995): 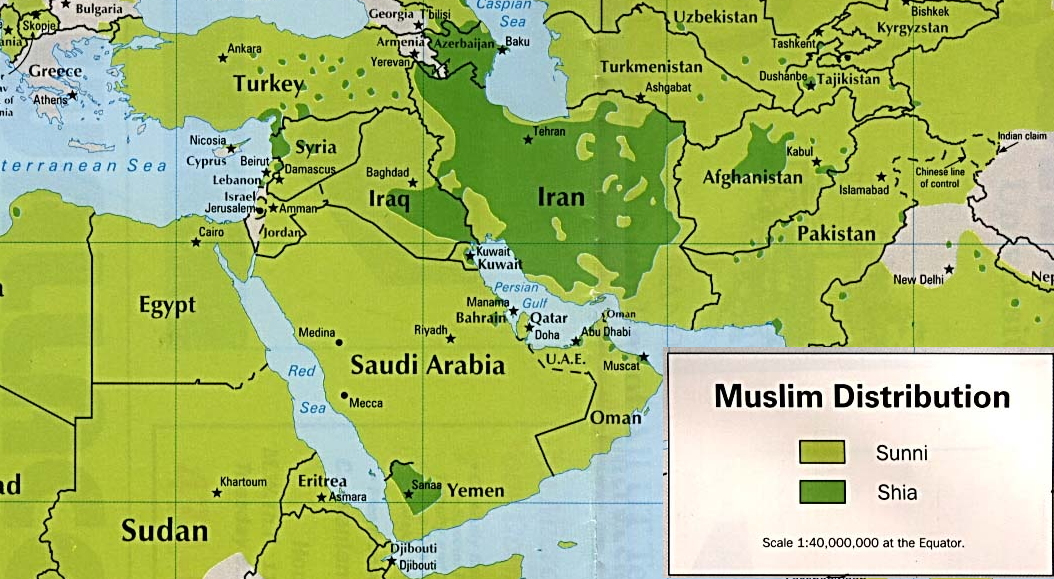 We should not expect Obama's Syria policy to be any more coherent than his foreign policy has been elsewhere in the region. (He lost Iraq, is losing in Afghanistan, surrendered Egypt to the Muslim Brotherhood, and abandoned Libya to competing tribes and terrorists.) So, to blow another $100 million or more of taxpayer money for "a shot across the bow" to "punish" Bashar al-Assad, with no meaningful military objective, is useless.

Then came his ultimate wimp-out, to trap Congress into going along with this worthless strategy (even though the president claims he doesn't need Congressional approval to act), so if anything goes wrong he can shift the blame.

However, in his extreme cowardice it's possible that Obama, inadvertently and unintentionally, has made the right decision for a change.

Why? Because Syria is not Tunisia, or Libya, or even Egypt. It is a client state of Russia and Iran, especially Iran, and has a modern military. Launching an attack against Syria does not guarantee we'll get the desired outcome; war can produce uncertain outcomes, including the spread of the conflict across borders, as al-Assad himself has indicated.

Because the U.S. is contemplating an act of war which could easily trigger, then suck the U.S. into a regional war, and which could even lead to a wider conflict of World War III fought in the Mideast theater, then this act of war should indeed be analyzed and debated and voted on by our Congressional representatives, who have the sole authority under the Constitution to wage war. And, considering that Obama has demonstrated he has the ability only to make things worse, it might be better for Congress to reclaim its warmaking powers (and say no to Obama) until, three-plus years from now, the White House has a new occupant who (hopefully) knows what he or she is doing.

Nick Chase is a retired but still very active technical writer, technical editor, computer programmer and stock market newsletter writer. You can read more of his work on the American Thinker website and at contrariansview.org.