Warning: mysqli_free_result() expects parameter 1 to be mysqli_result, bool given in /var/www/html/americanthinker/admin/common/functions/func.general.php on line 126
 Peak Petroleum Follies - American Thinker
« The P-Word | At a 9/11 ceremony, a little girl asks why her father died »
|

(1) Anthropogenic catastrophic climate change will occur if humans do not reduce their use of fossil fuels and the associated greenhouse gas emissions that result from such activities.

Issue (1) has already been dealt with on many well-known climate science skeptic sites.

Issue (2) is simply not supported by the data.

Dividing the global proved reserves for any given year by the global production rate for that year yields the R/P (reserves-to-production) ratio, which -- as defined by BP -- indicates where "[i]f the reserves remaining at the end of any year are divided by the production in that year, the result is the length of time that those remaining reserves would last if production were to continue at that rate."  One has, for several decades now, heard jokes along the lines of "the end of oil is always 20 years away."  Well, actually, the time period until the end of oil (using the global R/P ratio as the proxy) has been increasing steadily since 1980. 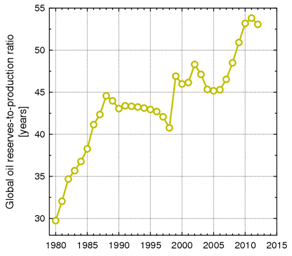 In other words, the discovery of new proven oil reserves has greatly outpaced global production increases over this period.

The trends are essentially equivalent for natural gas.  Global proved gas reserves have increased steadily since commencement of the BP dataset in 1980, following an approximate linear trend.  Global gas production has increased consistently since 1970 at a pseudo-exponential rate of increase.

Since 1980, the R/P ratio for gas has been approximately constant, meaning that new discoveries of proved gas reserves are offsetting corresponding increases in production. 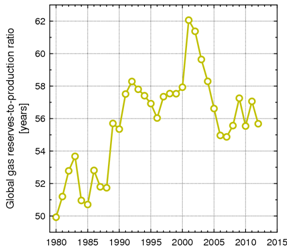 Consequently, there appears to be no significant support for the idea that we require economic schemes to reduce oil and gas use based on their expected near-term global restriction/depletion.