Warning: mysqli_free_result() expects parameter 1 to be mysqli_result, bool given in /var/www/html/americanthinker/admin/common/functions/func.general.php on line 126
 Obama's Syria address to the nation flops - American Thinker
« One year after attack, Benghazi rocked by car bomb targeting the foreign ministry | Still the Greatest Nation on Earth »
|

It was all too obvious last night that the only reason President Obama gave his speech to the nation was that it would have been too embarrassing to cancel it. The result was inconsistent and unsatisfying at any level. (Transcript here)

Obama commandeered the nation's airwaves to call for a "diplomatic pause" in a Congressional vote he requested to affirm a military threat to enforce a red line he doesn't take responsibility for.  The first half of his talk was intended to spark moral outrage,  recalling his mind's "images of children writhing in pain and going still on a cold hospital floor."  But the second half meandered off into Goldilocks territory as he promised to teach Assad a lesson that would be not too small ("The United States military doesn't do pinpricks" -- though SecState Kerry famously claimed it would be "unbelievably small"), and not too big ("I will not put American boots on the ground in Syria). Somehow or other, this man who never wore his nation's uniform, advised by SecDef Hagel, Samantha Power and Susan Rice, will thread the needle in punishing Syria with exactly the right amount of force that won't spark serious retaliation but will deter Assad.

Jeffrey Lord of The American Spectator notes that the 3 most prominent hawks supporting Obama's Syria initiative are all veterans of a small war that escalated:

John McCain wound up as a prisoner of war in North Vietnam in 1967, John Kerry wound up going to Vietnam in 1967 and so too did young Sergeant Hagel arrive on the shores of Vietnam in 1967. Say again: 1967. Which was three years after the President of the United States had solemnly pledged in 1964 - make that repeatedly pledged - that American boys like McCain and Kerry and Hagel would never...repeat never....have to be there in the first place.

Besides being implausible, Obama's speech was also internally incoherent. As John Harris of Politico put it, this was a zig-zag speech.

The speech began with an earnest statement on behalf of Zig, a sober appreciation that military power has its limits and good intentions don't necessarily equate to good policy: "I have resisted calls for military action because we cannot resolve someone else's civil war through force, particularly after a decade of war in Iraq and Afghanistan."

But it was followed the next paragraph by some piercingly indignant words making the case for Zag, the conviction that conscience and the obligations of global leadership sometimes require America to act. The aim was to shake a skeptical public out of complacency: "The images from this massacre are sickening: men, women, children lying in rows, killed by poison gas, others foaming at the mouth, gasping for breath, a father clutching his dead children, imploring them to get up and walk." 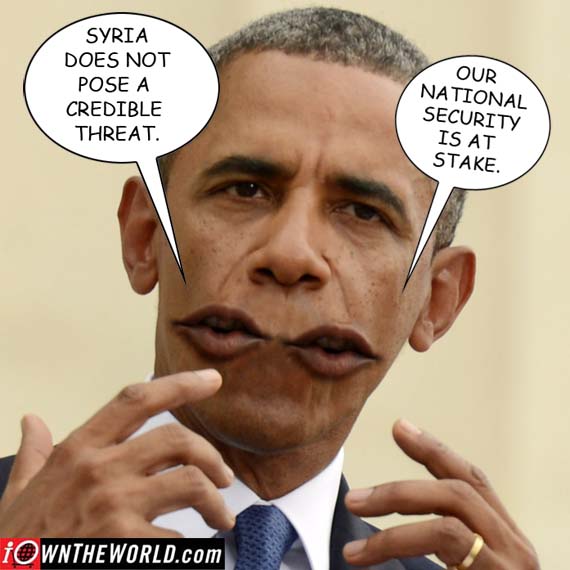 His policy toward Assad is equally incoherent. Jennifer Rubin paraphrases his message:

Chemical weapons use is beyond the pale and different than any weapon. We cannot let it go on. We have a national interest in acting. But I would ask Congress to hold off on voting for me to do anything. We'll consider a deal to have Assad turn over his weapons. But remain in power.

There were a couple of technical aspects of the speech that were just off. The teleprompter Obama was reading from (Thank God there was only one and we were spared the tennis match-style head moving back and forth between two of them!) was just a little bit too high, so Obama was not so much looking into the camera as looking above it (and symbolically above our heads). 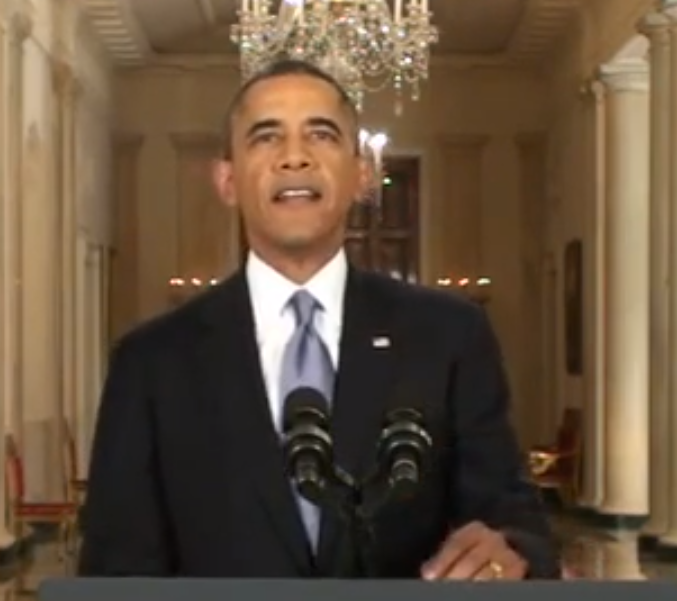 And the shock mount on the microphones was inadequate, so every time Obama put his hands down on the podium, viewers could hear a thump, and sometimes even a click when his fingernails hit. I found it distracting in the extreme. These little glitches seem to confirm an overall sense of White House incompetence.

Last night, the president did nothing to extricate himself from the morass he has created. As Richard Fernandez put it:

Syria is becoming the La Brea Tarpit of Democratic ambitions. It's pulling one dinosaur after the other into the quagmire, as each tries to help the other out. Before the end of this the entire top tier of the party will be in the morass. Obama, Kerry and Hillary, the whole lot of them.

Faced with opponents uncowed by his race and beyond the reach of his media claque, Obama is discrediting liberalism and the Democrats. This may be a good lesson for the country -- if only the ship of state does not founder on the shoals as amateurs run its foreign policy.