Warning: mysqli_free_result() expects parameter 1 to be mysqli_result, bool given in /var/www/html/americanthinker/admin/common/functions/func.general.php on line 126
 Obama claims, 'We're not some banana republic' and Mark Steyn examines the evidence - American Thinker
« Parents of teens who trashed former NFLer's house threaten to sue | I'd rather be called Cuban-American than Hispanic »
|

Obama claims, 'We're not some banana republic' and Mark Steyn examines the evidence

The speech President Obama gave yesterday at a Ford assembly plant just outside of Kansas City in Liberty, Missouri delivered to the country two very memorable lines, which is two more than most speeches he has ever given. The one that is getting the most attention is his solipsistic contention that in trying to defund Obamacare, Republicans are "trying to mess with me." Playground or basketball court rhetoric at best, the language stands beside "my military" revealing a chief executive with serious ego control issues.

But there was another phrase deployed that may be even more unfortunate for the president upon consideration. That is his claim that "We're not some banana republic." Mark Steyn takes him up on the point, to devastating effect. Because this is Steyn and full of wit, you really should read the whole thing. But here is a sampler.

As Obama explained in another of his recent speeches, "Raising the debt ceiling, which has been done over a hundred times, does not increase our debt." I won't even pretend to know what he and his speechwriters meant by that one, but the fact that raising the debt ceiling "has been done over a hundred times" does suggest that spending more than it takes in is now a permanent feature of American government. And no one has plans to do anything about it. Which is certainly banana republic-esque.

Is all this spending necessary? Every day, the foot-of-page-37 news stories reveal government programs it would never occur to your dimestore caudillo to blow money on. On Thursday, it was the Food and Drug Administration blowing just shy of $200 grand to find out whether its Twitter and Facebook presence is "well-received."

...a banana republic doesn't happen overnight; it's a sensibility, and it's difficult to mark the precise point at which a free society decays into something less respectable. Pace Obama, ever swelling debt, contracts for cronies, a self-enriching bureaucracy, a shrinking middle class preyed on by corrupt tax collectors, and thuggish threats against anyone who disagrees with you put you pretty far down the banana-strewn path.

Obama has been behaving like a caudillo in ways beyond those enumerated by Steyn. Laughter may still be effective in persuading low information types about the fundamental transformation Obama is implementing.

Dianny at All the Right Snark has another humorous view of the banana republic comparison: 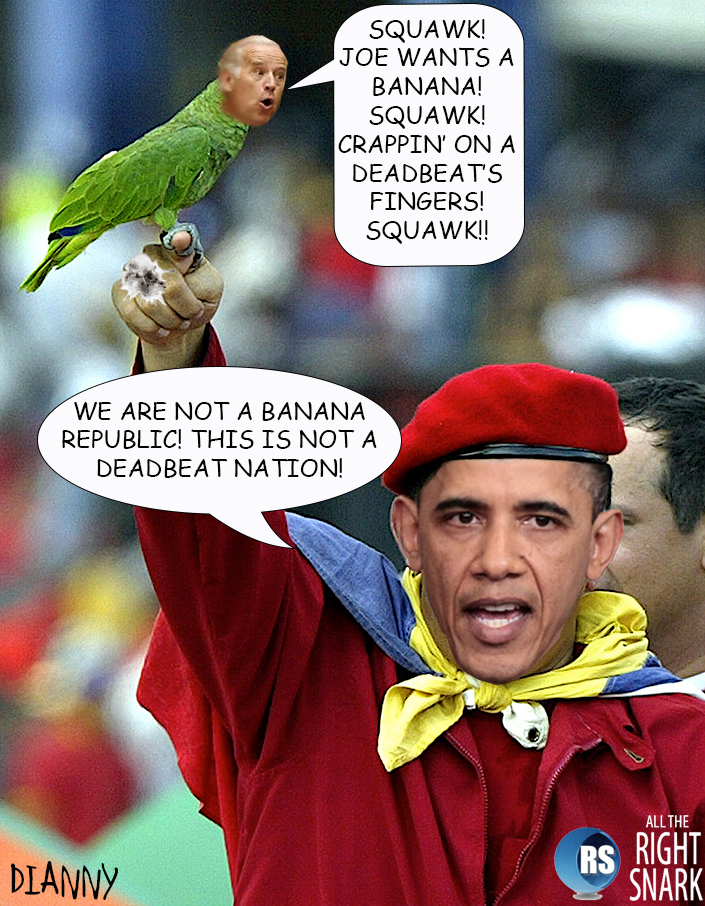