Just when you thought the Nanny State couldn't get anymore drunk with patronizing power over people, along comes Michelle Obama with a most urgent plea: Make sure you drink water!

Who knew?! Apparently we now need the government to tell us to do the most basic of things.

To get the word out, the First lady has pre-recorded messages that will air on numerous television shows including the Today show and Good Morning America. And also on Un Nuevo Dia. I wonder if she'll find another way to insult the Latino community, perhaps telling them a second time that their kids are too fat. But no worries. The government's here to save the day with The Water Diet. 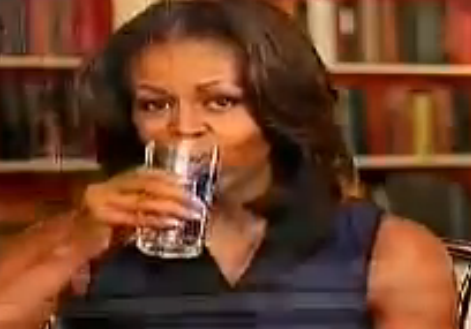 But that's not all. Mrs. Obama plans to fly to (warning: something super clever up ahead) Watertown, Wisconsin. So cute!

And there's more. Actress Eva Longoria will be accompanying her. Nothing like traveling with A-list celebs to help spread the Gospel of Government.

While his wife is in Wisconsin, the president "plans to ask cities all over to make their town a Water-town." I'm not even sure what that means, but I'm confident the left has found this vision to be complete and total genius. We are all Watertown now.

And not to be outdone by a meaningless obtuse phrase, wife Michelle's got a few wild and crazy claims of her own.

You are what you drink," Obama concludes. "And when you drink water, you're at your best...so drink up!

Wow! I don't know about you, but this is news to me. I am what I drink?! Holy smokes!

But the snake oil pitch doesn't end there. Did you know that increased water drinking is the single most important thing that families can do to improve their health? As an entire family unit, I guess.

I've come to realize that if we were going to take just one step to make ourselves and our families healthier, probably the single best thing we could do is to simply drink more water," Obama notes in a press release regarding her "#drink H2O" initiative. "That's it - it's really that simple.

Hmm. It's that simple.

Apparently some scientists have searched for evidence to support Michelle Obama's water rants and it seems her claims have come up short.

There really isn't data to support this," Dr. Stanley Goldfarb of the University of Pennsylvania tells Politico. "I think, unfortunately, frankly, they're not basing this on really hard science. It's not a very scientific approach they've taken. ... To make it a major public health effort, I think I would say it's bizarre.

Goldfarb, a kidney specialist, is troubled by White House claims that drinking more water boosts energy, calling that conclusion "quixotic." "We're designed to drink when we're thirsty," Goldfarb adds. "There's no need to have more than that."

But no matter. Michelle Obama is undeterred. She is a woman on a mission and, as such, has enlisted a host of big name designer water brands to back up her message. And in a bit of moving personal revelation, we now know that Mrs. Obama is quite the water drinker. I don't know about you, but I find that deeply touching.

She is a water drinker from morning until night," Kass said. "Obviously, I'm not with her all day, so I don't know exactly how much. She drinks water throughout the day. She pretty much has water with her whenever I see her.

Mrs. Obama is exhibiting a kind of neurosis that seems to be at the heart of contemporary progressive politics: a compulsion to tell other people how to live their lives. I actually encourage her to continue in this vein, as it is educational for the rest of us to see how our political masters think.

It would not surprise me to see the First Lady begin to offer advice on how to dress ourselves. After all, the media claque has been telling us for years that she has a fashion sense that is superb, so in her delusions she could easily come to believe she has an obligation to tell us to accessorize carefully, and button up our overcoats on chilly days.

Good Lord, the vanity of this crowd is mind boggling.