Warning: mysqli_free_result() expects parameter 1 to be mysqli_result, bool given in /var/www/html/americanthinker/admin/common/functions/func.general.php on line 126
 German voters deliver big victory to Angela Merkel's conservative party - American Thinker
« 3 Americans among Nairobi mall attackers | Republicans turn on each other as shutdown vote in Senate draws near »
|

Europe's increasingly dominant power Germany is keeping the Christian Democrats of Angela Merkel in power, with an unexpectedly big victory in an election that was supposed to be close. Final results are not yet in (updates here), and it is unclear whether the CDU will obtain an absolute majority of seats, or if it will be forced to enter a coalition.  Either way, the voters' endorsement is historic: 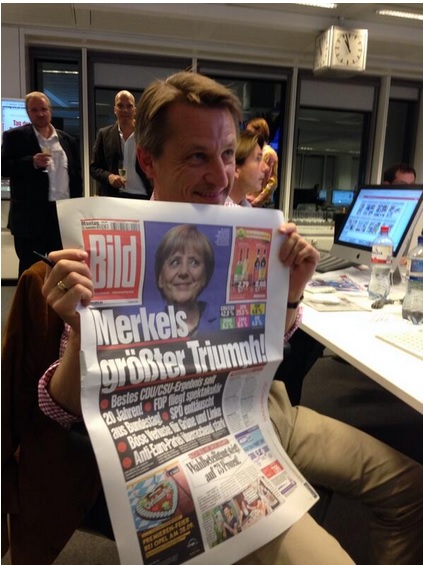 Here is an electoral map, revealing that the big cities voted for the socialist SPD, but most of the country went for the CDU: 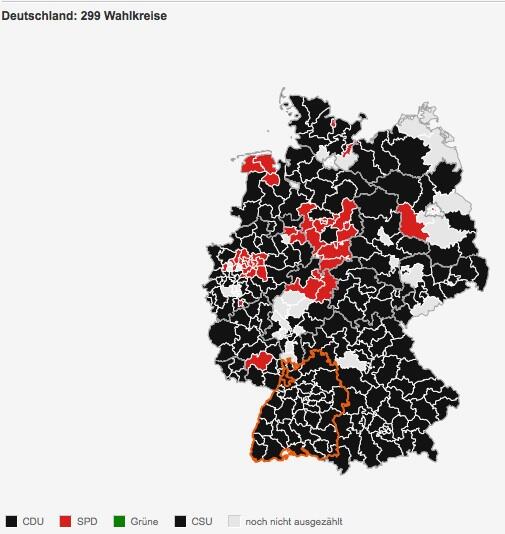 There are two conservative small parties that are very close to the 5% of votes minimum necessary to be represented in parliament. The pro-business FPD party, which was Merkel's coalition partner previously, is currently at 4.8%, which would prevent it from representation in parliament, and thus unavailable to form a collation. The new Alternativ für Detuschland (AfD), an anti-conservative party apparently siphoned off support from the FPD, while also coming within a hair's breadth of the magic 5% share necessary for representation. Itr is possible that one or both might make it, and this be available to form a coaltion. But if not, Merkel may be forced into a "grand coalition" with the left-leaning SPD. Such uneasy coalitions have happened before. John Fund writes:

That leaves the prospect of a so-called grand coalition between the CDU and the Social Democrats. We saw a similar scenario before, in 2005, when the election results required these two parties to govern together in uneasy alliance. Both wound up hating the partnership. Time will tell if this unhappy history repeats, but the most likely outcome of Sunday's vote is in fact a grand coalition. Given this, and given the state of the discredited left-wing minor parties, Germany may lack an effective opposition in parliament. Dissent against euro bailouts will be organized outside parliament.

Either way, German voters have endorsed Merkel's policies, which center on fiscal responsibility for Germany, and a demand that Europe's laggards like Greece, Portugal, and Italy be forced to lower their deficit spending as a condition for German fiscal support of bailouts.  Greece is widely expected to shortly ask for let more hundreds of billions of euros from the EU, which means mostly from German taxpayers.

Germany is third in line after Norway and Australia as democracies handing power to conservatives in an age of fiscal irresponsibility. Expect the American media to ignore this as much as possible.