Warning: mysqli_free_result() expects parameter 1 to be mysqli_result, bool given in /var/www/html/americanthinker/admin/common/functions/func.general.php on line 126
 An Economic Tale of Three Oil Regions - American Thinker
« Economic freedom without actual freedom? | Regarding Ecstasy at the Electric Zoo »
|

Over the past decade, the states of North Dakota and Texas -- as well as the Canadian province of Alberta -- have seen significant increases in oil production. Back in 2006, Alberta's oil sands development was referred to as Canada's "economic miracle." In 2012, we were still hearing this language. Of course, the same is often said about North Dakota and Texas.

But are all the claims true? An unequivocal yes for North Dakota, a qualified yes for Texas, and an unequivocal no for Alberta.

The following charts show the regional ratios against the corresponding national average since 2006 for the unemployment rate, as well as per capita real GDP, personal income, and personal disposable income. 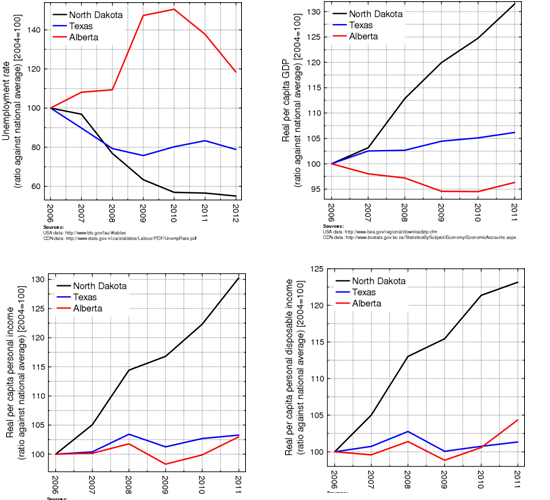 Since 2006, Alberta's unemployment rate has significantly underperformed with regard to the Canadian national trend. On the other hand, North Dakota -- in particular -- and Texas have both performed much better than the overall federal trend.

Alberta's per capita GDP growth has substantially underperformed with respect to the Canadian average, and its personal income growth has been mediocre at best. Indeed, between 2006 and 2010, Alberta's real per capita GDP growth was last out of all ten Canadian provinces, and over this timeframe, its provincial ranks for real per capita personal income and personal disposable income growth were substandard at 7/10 and 6/10, respectively.

Granted, Alberta's unemployment rate has long been lower than the Canadian average, and its per capita GDP and personal income higher than the national average, but this is due almost entirely to historical conventional oil production in Alberta -- and not from the more recent oil sands development during the past decade. For these core economic indicators since 2006, Alberta has been either treading water -- or even losing ground -- compared to the rest of Canada.

Among these three key North American oil producing regions, only North Dakota can be classified clearly as an "economic miracle." Texas has experienced a strong economic performance, but Alberta's has been disappointing -- especially in light of the hype the northern Alberta oil sands receive not only in the Canadian media, but also on the global stage.

Dr. Sierra Rayne writes regularly onenvironment, energy, and national security topics. He can be found on Twitter at @rayne_sierra.