Warning: mysqli_free_result() expects parameter 1 to be mysqli_result, bool given in /var/www/html/americanthinker/admin/common/functions/func.general.php on line 126
 5 Reasons Congress Should Not Authorize Obama's Syrian Shoot Out - American Thinker
« School art project encourages students to step on American flag | The mask is off: They hated Bush, not war »
|

5 Reasons Congress Should Not Authorize Obama's Syrian Shoot Out

As a courtesy -- and selfless service -- to the world, President Obama has officially appointed himself the globe's top cop. "I'm comfortable going forward without the approval of a United Nations Security Council that, so far, has been completely paralyzed and unwilling to hold Assad accountable," the new international sheriff said Saturday morning. 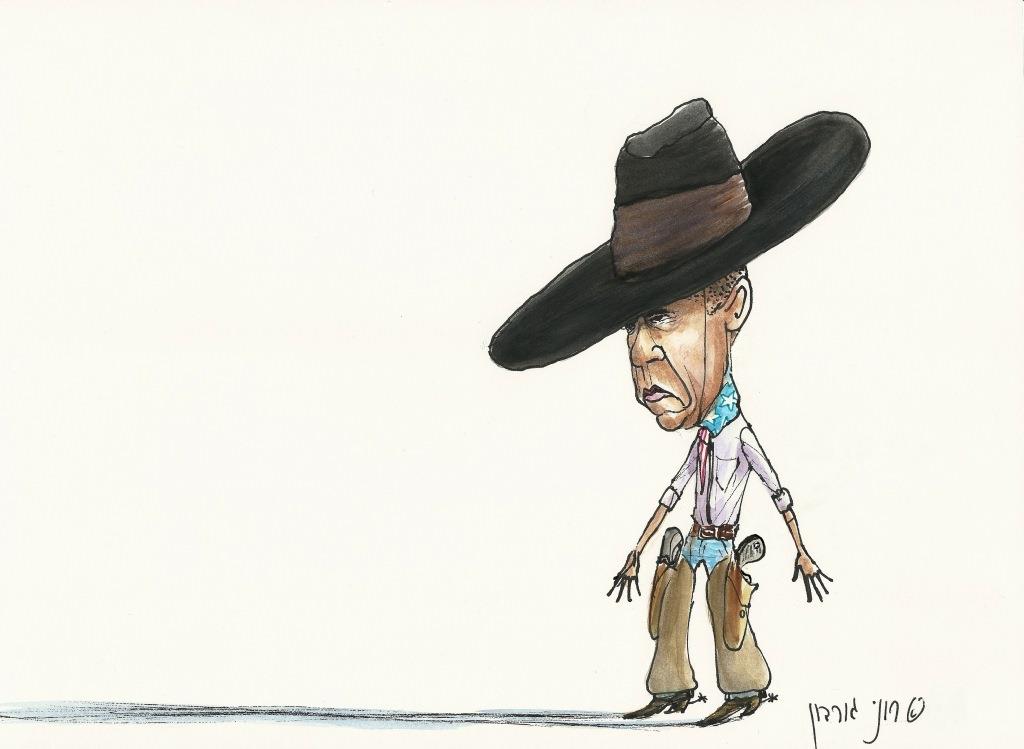 Having already struck fear into the heart of those unsavory out-of-towners who may or may not have gassed their own people, Sheriff O reiterated that he's rounded up a dedicated posse of deputies, positioned his warhorses on the outskirts of town and is ready "whenever we choose" to shoot 'em up. "I have decided that the United States should take military action against Syrian regime targets," he twanged in the Rose Garden.

But in a surprise (and possibly cowardly, self-serving) rustle that relieves the administration of blatant hypocrisy, the sheriff has also reluctantly agreed to what the Constitution already requires him to do: get Congressional approval. Both Sheriff O and Deputy Joey "Fife" Biden previously condemned any military action without express Congressional approval unless attack on the US was imminent or had occurred.

Now given the opportunity, Congress should not follow lead-from-behind Sheriff O and instead resoundingly reject a shoot out on the streets of Global-berry. Here are 5 reasons why:

1. Sheriff O and Congress do not have the support of American People for war in Syria. Reuters/Ipsos found that this week just 20% of Americans thought the US should take action against Syria. That's up from 9% last week, but still a long way from support numbers that would make this an American action and not an Obama quick draw. Rasmussen found that even after Deputy-of-State Kerry's melodrama on Friday, 40% oppose getting involved any further in Syria, with only 37% supporting increased involvement. Congressional debate is not likely to alter this.

2. Even if Obama gets Congressional approval, the potential for a regional war, as Charles Krauthammer noted, or global war is real. Imagine if North Korea launched 200+ missiles at key military centers in and around Los Angeles and San Francisco, but sent a message to Obama that this was just a "shot across the bow" or "limited strike." Americans and US allies would be indignant and demand the Hermit Kingdom be blown to kingdom come.

Striking Syria without committing to the conflict until victory is won risks drawing the regions' powers and allies into escalated conflict.  Iran and Syria have promised this would happen. Russia & China feel duped on Sheriff O's Libyan crusade and may decide to step in this time turning O's limited strike into a global show down. Additionally, an attack on Syria justifies to Iran and Hezb'allah terror strikes on American interests, and possibly US soil.

3. American Intelligence under Obama has an embarrassing history of distortions, lies, inanity and mistakes in this region of the world. Sheriff O's intelligence posse assured him that he was backing the winning team with Morsi in Egypt. Aunt Susan, his current trusted National Security Advisor, guaranteed when she was at the UN that Benghazi was a protest in reaction to a movie. And even now, with holsters ready and hats tipped, O's intel machine has convinced him that giving the "good" Al Qaida in Syria air force cover and assisting the jihading Al Nusra cannibals and Christian killers is in America's national interest. Congressional approval does not change bad intel.

America doesn't have a respectable track record of accuracy in the region and we do know that intelligence reports have been unreliable in the past  (Iraq and WMDs.) Until we actually know who's responsible for the chemical weapon attack, what will happen if Assad falls, and how US security might be affected if we go to war, going in guns a blazin' -- with or without Congressional authorization -- is a completely unnecessary risk militarily, financially and civilizationally.

4. Obama's red line will turn into a red noose for America if not rejected by Congress. If Congress caves to this leftist regime's efforts to solidify the US President as the world's top cop by giving him a "cover" vote for an unjustified war, precedent will be set that forces America to take action each and every time a UN rule is violated. Other nations will see that they get a pass and don't have to spend the money or take the risk of war because the US posse will get 'em.

"Out of the ashes of world war, we built an international order and enforced the rules that gave it meaning," gloated Obama in his Rose Garden remarks. Strengthening and further expanding a world order (while simultaneously weakening America's sovereignty) is his larger objective. Sheriff Obama is dedicated to internationalism and as Narcissist-In-Chief sees himself as its unelected leader: "If we won't enforce accountability in the face of this heinous act, what does it say about our resolve to stand up to others who flout fundamental international rules?" Deputy Kerry reiterated the same on Friday: "It matters if the world speaks out in condemnation and then nothing happens."

5. Finally, America can't afford it. It's not just the $100,000,000+ that would be a certain cost incurred for the little prick that Obama wants to administer. The cost of unintended consequences could make the price tag of Obama's shootout soar far beyond Iraq's $1Trillion bill (and still increasing.)

Ultimately, it's not Obama's choice as to whether or not the military round up will be a "limited strike" or that boots won't end up on the ground. What if Syria retaliates and shells our warships? What if Iran launches an all-out war with Israel?  What if Russia and China decide that Damascus is not a big enough town for them and Sheriff O? America is broke, has $17 Trillion of debt and millions of its own citizens that are in need. On top of that, the economy as a whole is still weak and may be entering another recession. Regardless, Obama wants to run the country further into debt to prick Syria .

Congress should loudly and emphatically reject Obama's Middle East marauding and remind Global-berry's cast of clowns that the United States is not the world's posse for peace, and its President is certainly not the planet's sheriff.