Warning: mysqli_free_result() expects parameter 1 to be mysqli_result, bool given in /var/www/html/americanthinker/admin/common/functions/func.general.php on line 126
 Obama vs. the Other Presidents since Kennedy: Still an Economic Disaster - American Thinker
« Farrakhan: Disappointed in Obama | Will Teachers Like Obamacare? »
|

Obama vs. the Other Presidents since Kennedy: Still an Economic Disaster

In my previous American Thinker article, I compared the economic (and other) records of Obama versus Reagan.  Reagan came out as the decisive victor.

Some readers weren't entirely satisfied.  They wanted to see a comparison of Obama's economic record against that of Carter, Bush 43, and others.  So here it is, for all the presidents since Kennedy.

The following figures show per-capita GDP in constant 2005 U.S. dollars, unemployment rate, civilian labor force participation rate, civilian employment-population ratio, average duration of unemployment, per-capita real personal income in 2009 chained dollars, per-capita real personal disposable income in 2009 chained dollars, and the gross federal debt.  The year before each president took office is defined as Year 0.  With the exception of gross federal debt (best illustrated as the change in debt as a percentage of the economy during an administration), the value of each indicator is normalized to 100 at Year 0 to facilitate inter-comparisons. 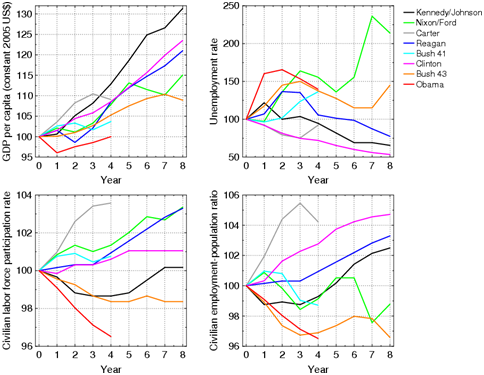 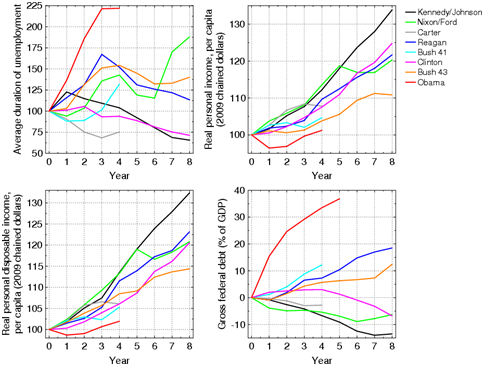 As is clear, Obama unequivocally has the worst economic performance of any president since (and including) Kennedy, coming in last on each and every single indicator with the sole exception of the unemployment rate -- for which Obama is second-worst behind the Nixon-Ford administrations.