Warning: mysqli_free_result() expects parameter 1 to be mysqli_result, bool given in /var/www/html/americanthinker/admin/common/functions/func.general.php on line 126
 Obama has painted himself into a corner - American Thinker
« Too many dead journalists in Mexico | Communications intercept proves Syrian forces launched chemical attack »
|

Obama has painted himself into a corner

Not only is there no outcome of an attack on Syria that would benefit the United States, President Obama has already denied he has the authority to take such action. It takes ineptitude of historic dimension to fashion such a no-win situation in world politics.

President Obama has already said a president can't take military action without congressional approval, and Vice President Biden has stated that it would be grounds for impeachment. During the 2007 presidential campaign, then-Senator Obama stated to the Boston Globe: 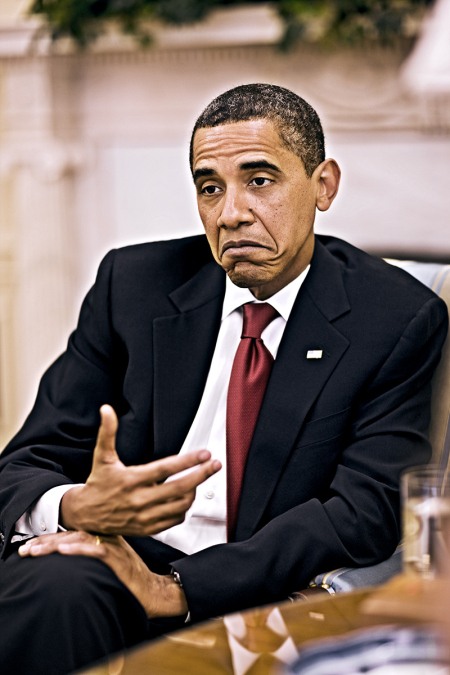 The President does not have power under the Constitution to unilaterally authorize a military attack in a situation that does not involve stopping an actual or imminent threat to the nation.

As Commander-in-Chief, the President does have a duty to protect and defend the United States. In instances of self-defense, the President would be within his constitutional authority to act before advising Congress or seeking its consent.

There is no real wiggle room here, in the words "actual" and "imminent." There is no credible claim to any threat to the US.  Secretary Kerry's speech yesterday was full of moral posturing but no claims of threat.

There is no shortage of people willing to remind Obama of his self-proclaimed obligation to seek congressional approval for action against Syria. More than a score of members of Congress have already done so.  And on his left flank, Obama faces the pacifist and anti-imperialist wings of his base, already enraged over the NSA abuses. They made the same claims against Bush, so have their ammo stockpiled, to use a metaphor painful to them.

Even worse, if anyone still takes Joe Biden seriously as a non-buffoon, he claimed that such action would be grounds for impeachment.

It is precisely because the consequences of war - intended or otherwise - can be so profound and complicated that our Founding Fathers vested in Congress, not the President, the power to initiate war, except to repel an imminent attack on the United States or its citizens. They reasoned that requiring the President to come to Congress first would slow things down... allow for more careful decision making before sending Americans to fight and die... and ensure broader public support.

The Founding Fathers were, as in most things, profoundly right. That's why I want to be very clear: if the President takes us to war with Iran without Congressional approval, I will call for his impeachment.

I do not say this lightly or to be provocative. I am dead serious. I have chaired the Senate Judiciary Committee. I still teach constitutional law. I've consulted with some of our leading constitutional scholars. The Constitution is clear. And so am I.

President Obama's presidency is in free-fall. He is antagonizing parts of his base as he embarks on action that has no upside and many downside risks. What if Russia, China, and/or Iran take retaliatory action? They have their own internal political considerations, as well as the goal of reducing American influence, at which they are so far succeeding quite noticeably. Do any of them think that Obama would be able to escalate back?

My colleague Rick Moran notes (with some justice) that "both sides do it all they time. They're all hypocrites" when it comes to assertions of presidential or congressional prerogatives. But even if you grant that, President Obama has managed an extraordinary feat. The art of strategy consists in part of being able to look ahead 2 or 3 moves on the chessboard, and pick actions that leave more satisfactory options than Obama has structured for himself (and for our nation).