Warning: mysqli_free_result() expects parameter 1 to be mysqli_result, bool given in /var/www/html/americanthinker/admin/common/functions/func.general.php on line 126
 How a Climate Alarmist Compares Norway and Denmark - American Thinker
« Why WaPo Mideast Coverage is Untrustwor​thy | Dropping a 'Green' Hammer on the Economy »
|

How a Climate Alarmist Compares Norway and Denmark

Mark Jaccard is an economist at Simon Fraser University in Vancouver, British Columbia.  Jaccard is also an extreme climate alarmist and activist who apparently likes to claim he has a Nobel Prize -- even though he does not.  In the August 13 edition of the Huffington Post (or Compost, as Mark Levin might say), Jaccard begins his piece with the following:

George Orwell used parody and caricature to expose the propaganda lies of the fascists and communists who threatened humanity in the mid-20th century. Today, his talents are badly needed to counter the propaganda of corporate executives who seek self-enrichment by accelerating the burning of the coal, oil and gas here and abroad.

Apparently we need to counter some propaganda.  Good idea.  We can start by countering the following propaganda from Jaccard himself in this very article:

For example, Denmark has the same standard of living as Norway, yet possesses none of its oil. Should we believe that if Norway had forgone exploitation of its oil resources that its people would today be significantly less well off than their Danish neighbours?

The take-home message of Jaccard's article is that we need to get ourselves off fossil fuels pronto, and that -- in doing so -- we won't be making any major economic sacrifices.  Indeed, as Jaccard claims, we only need look at Denmark, which apparently "has the same standard of living as Norway, yet possesses none of its oil."

What a hilarious joke Jaccard is playing on us.  Or is this propaganda from the climate alarmists that we need to counter?  Clearly the latter.

Some facts may get in the way of Jaccard's claims.  The following figures show the comparative per-capita GDP on a purchasing power parity (PPP) basis and unemployment rates for Denmark and Norway since 1980 (and including IMF estimates out to 2018). 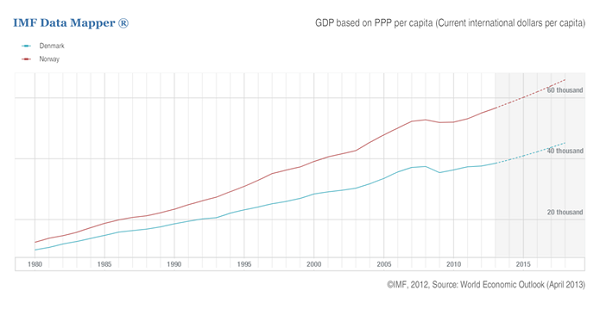 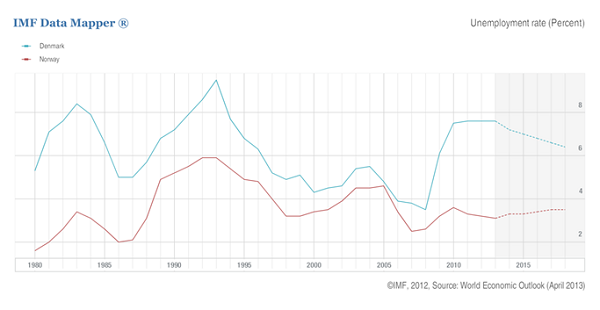 Denmark's unemployment rate has always been higher than Norway's, often by a large margin.  The current unemployment rate in Denmark is 7.6%, while Norway is at only 3.1%.  Since it is difficult to have a high standard of living without a job (even in a socialist Scandinavian state), Denmark fails on this front as well.

According to the IMF, Denmark's net debt is 10% of GDP, expecting to increase to 14% of GDP by 2018.  These are respectable values compared to some other nations, until you realize that Norway's net debt is -175% of GDP (yes, negative 175%) and anticipated to decline further to -188% of GDP over the next five years.

Norway also has a higher life expectancy than Denmark and is ranked first overall in the world on the U.N.'s Human Development Index.  Denmark's rank? Fifteenth, behind South Korea, Hong Kong, and Iceland (of note, the USA is in third place).

Over the last couple days, the Norwegian prime minister said "he's in favor of spending less of the country's $760 billion oil fund than the official 4 percent target in order to prevent the economy from overheating."  It must be tragic for a nation of only 5 million to have so much oil wealth (i.e., Norway's oil fund is already at $152,000 per person and rising) that one has to be concerned about overheating its economy.

Thus, for Jaccard to claim that "Denmark has the same standard of living as Norway" is nonsense.  Norway is much better off than Denmark, in large part due to its oil wealth.  In contrast to what Jaccard is attempting to argue, the lessons for the USA and Canada are that we should develop our oil and gas resources to the maximum extent possible in order to realize the wealth and high standard of living that Norway has achieved.  Alternatively, we could refuse to develop these natural resources and have a much lower standard of living, like Denmark -- but I suspect that that is not the preferred option.