Warning: mysqli_free_result() expects parameter 1 to be mysqli_result, bool given in /var/www/html/americanthinker/admin/common/functions/func.general.php on line 126
 Health Care Costs are Still Growing Rapidly - American Thinker
« The War that dare not be named | President Obama's words mean nothing »
|

I'm skeptical, especially when Kliff claims that "health care costs now growing at the same rate as the rest of the economy," and then references one of her prior articles using non-normalized health care expenditure data between 2000 and 2011.

There are only two metrics to determine if health care costs are increasing over time: (1) normalize them to the size of the economy, and/or (2) normalize them to per-capita expenditures in constant-dollar terms.  Premium costs are also not a good indicator of true health care costs because there are public-sector expenditures whose costs appear in taxes, not premiums.

Furthermore, it's far too early to even attempt to analyze trends for 2012 and 2013.  The full accounting on these years is not complete yet (of course, 2013 is barely half-over).

But when we look at the time trends for private, public, and total (i.e., private + public) health expenditures as a percentage of GDP between 1995 and 2011 (the latest year with available data), there is no evidence of a declining or stablized trend: 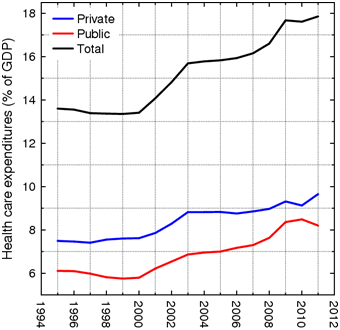 The continuing rapid rise in health care costs is clear from the following plot, which shows the trend in total per-capita health expenditures on a purchasing power parity (PPP) basis in constant 2005 international dollars: 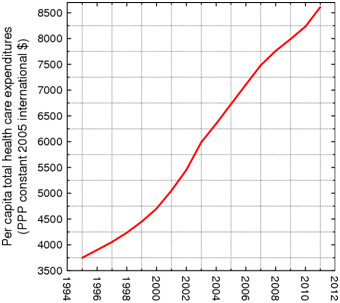 Overall, I can find no evidence that "health costs are growing really slowly" or "growing at the same rate as the rest of the economy."