Warning: mysqli_free_result() expects parameter 1 to be mysqli_result, bool given in /var/www/html/americanthinker/admin/common/functions/func.general.php on line 126
 Dramatic story of political 'gun violence' is ignored by the gun-grabber media - American Thinker
« President Obama can not answer questions that the media does not ask | Has anyone seen a million dollar check lying around in Detroit's city hall? »
|

The extent of the transformation of our mass media into a mere propaganda apparatus can be gauged by the black hole treatment given to a story that pushes all of the buttons needed for wall-to-wall treatment, save one: the villain is a member of victim group acting on behalf of left wing causes. The shooting at the Family Research Council last year has been consigned to obscurity by the MSM.

One favorite meta-narratives of the propaganda media is that crazy right-wingers all over the country are hording guns in order to use them on innocent victims. This framework can be imposed on incidents of crazy people shooting others almost indiscriminately. The archetype is Jared Loughner's attack on a Gabrielle Giffords event, where the media rushed to blame Sarah Palin because a map she had distributed used a target logo on the Giffords' district. Immediately presuming that Loughner had even seen the map (he hadn't) and that the mere sight of such a visual metaphor could incite a murderous rampage, the propaganda media followed their customary methodology for damaging their conservative target's brand with more voluble figures charging Palin directly, and then establishment types putting out headlines like the Washington Post's "Palin caught in crosshairs map controversy after Tucson shootings."

But when a young gay activist named Floyd Lee Corkins bought a bagful of Chik-fil-A sandwiches and brought them to the Family Research Council headquarters intending to "smother Chick-fil-A sandwiches in [the] faces" of his victims after he shot them, he found his target on a map provided by the Southern Poverty Law Center, a left wing outfit that has prospered mightily by raising the specter of victimization by racists (and more recently, gay-haters) and fundraising on the promise to stop them.

Mark Hemingway of the Weekly Standard lays out in detail the dramatic story of heroic security guard Leo Johnson, whose recovery from his grievous wounds offers inspiration, and the multi-dimensional hypocrisy of the SPLC's role in inciting the very sort of violence it and other parts of the progressive apparat claim to be interested in preventing.

As recently as last week, SPLC cofounder Morris Dees defended the Family Research Council's inclusion on the "hate map." "Well, first of all, having a group on our hate map doesn't cause anybody to attack them any more than they attacked us for one thing or another," Dees told CNSNews.com on August 6. It takes quite a bit of hubris for Dees to defensively equate rhetorical attacks on his own organization with actual gun violence against an organization whose politics he dislikes. It also seems more than a little convenient that Dees now denies a connection between rhetoric and violence. In 2011, an SPLC blog post, "Expert: Political Rhetoric Likely a Factor in Arizona Shooting," concluded that Sarah Palin's rhetoric "could have provided a facilitating context" for the Giffords shooting, though, again, there is no evidence Loughner was exposed to it.

By the loose standard of "facilitating context," the unjust inclusion of the Family Research Council headquarters on a "hate map" otherwise filled with violent white nationalist organizations is a much more serious transgression-particularly when Corkins admits he used the map to learn about his target. And while Leo Johnson's defining characteristics are his courage and character, as long as we're talking about context, it's worth pondering why the founder of a celebrated civil rights organization is obdurately unreflective about the role his SPLC played in the shooting of a black man.

Dees's callous remarks only underscore the point that, unlike many of the more publicized incidents in recent years, the Family Research Council shooting actually warrants a discussion. If anyone is sincerely interested in frankly exploring politics and violence, Leo Johnson still works at the Family Research Council and walks past the bullet holes in the lobby every day. It might be worth asking him what he thinks. "I've worked here for 14 years. I know these people, I've worked closely with them, and I know what people they are," he says. "So to label them a hate group is absurd. It's absurd."

August 15 marks the first anniversary of the attack on the FRC.  We must do everything we can to 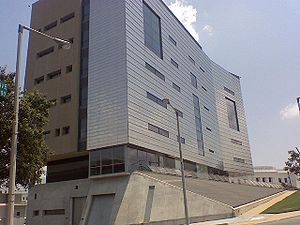 call attention to it. The SPLC's lavish headquarters (the "poverty palace") in Montgomery, Alabama should be the site of a demonstration. Of course, the left has huge foundations bankrolling "activists" who roll out campaigns that include demonstrations, social media, advertising, and other propaganda tools, and they have the support of the MSM. But we have the facts. The left is serially putting out the notion that the mere ideas of the right are equivalent to violence, and therefore merit retaliation with violence. This is a precursor to political violence and must be called out.

Start by read in Hemingway's excellent piece here, which does so.