The State Department's new spokeswoman Jen Psaki has sacrificed her own, the State Department, and Secretary of State John Kerry's credibility with her readily proven lying about his whereabouts as the coup in Egypt unfolded. Jennifer Epstein at Politico:

White House and State Department officials told POLITICO that Kerry participated in the meeting via conference call. One also noted that while Kerry was not in the room, Deputy Secretary of State Bill Burns was there and is visible in the photo.

A CBS News producer tweeted a photo of Kerry's yacht, Isabel, on Wednesday afternoon and said a colleague saw Kerry boarding it at the Nantucket Boat Basin. She shouted "Morsi," but got no response from the secretary of state.

But the State Department said Kerry was not aboard a boat on Wednesday and has spent the day working the phones on Egypt. "Since his plane touched down in Washington at 4 a.m., Secretary Kerry was working all day and on the phone dealing with the crisis in Egypt," spokeswoman Jen Psaki said. "He participated in the White House meeting with the president by secure phone and was and is in non-stop contact with foreign leaders, and his senior team in Washington and Cairo. Any report or tweet that he was on a boat is completely inaccurate."

This is a bald-faced lie. Mary Katherine Ham writes:

That's Jen Psaki, formerly of the Obama campaign, if the elegant ease of her B.S. syntax rings a bell for you. In the face of conflicting reports and photographic evidence from other Nantucket denizens that Kerry was indeed in Nantucket and his boat was on the water, State finally admitted to CBS that Kerry was "briefly" on his boat Wednesday.

A good thing they did, because the Boston Herald caught this picture of Kerry looking like a rich yachting doofus. 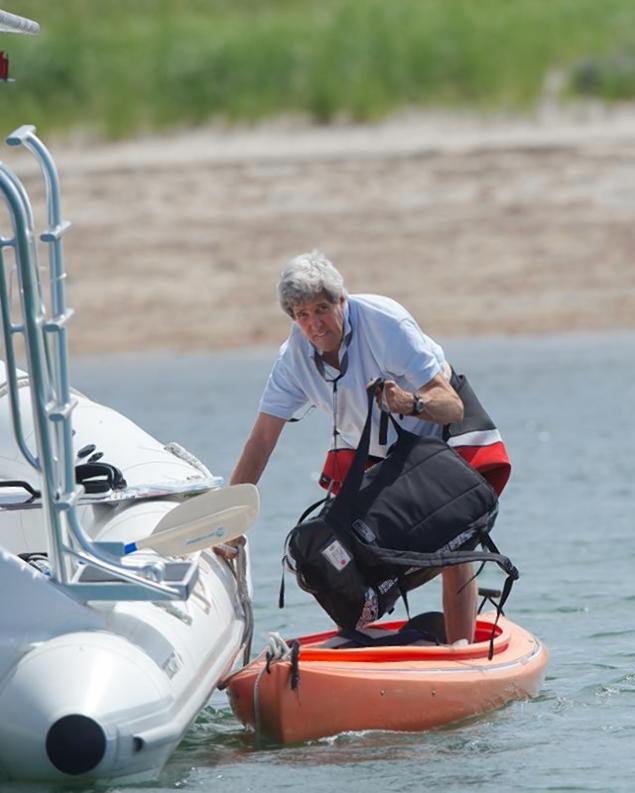 Diplomats are supposed to be able to lie, but they have to do it with style and finesse, over matters easily checked. The credibility of all concerned has taken a nosedive, just as the State Department faces very delicate tasks in Egypt.

American Thinker's Ed Lasky has been warning about Psaki since her appointment as the new State mouthpiece was announced. It is not just that her instinct tells her to lie, but that she is out of her depth. How's that "smart diplomacy" working out?