It appears the vandal defacing public buildings and monuments in Washington DC is a 58 year old illegal immigrant.

The woman, who has a Chinese passport, arrived in Washington a few days ago and was traveling on an expired visa, prosecutors said. Police said she had no fixed address but that she told officers she lived in Los Angeles.

She was caught when she was observed at the National Cathedral. 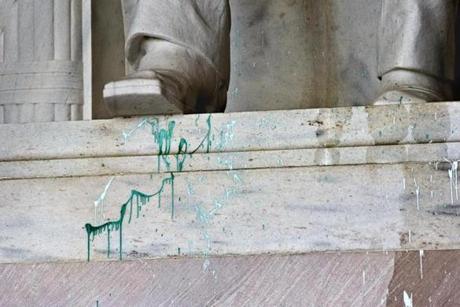 When a police officer approached her, she walked away and placed the can with green paint inside one of three bags that were sitting on chairs in the chapel, documents show.

She also had green paint on her clothing, shoes and body, according to the documents.

She was wearing a multicolored sock on her right arm, and a similar sock was found in a trash can in a bathroom at the cathedral on top of a can of green paint, according to the documents.

The bags placed in the chapel also had paint cans in them, the documents show.

Since then other witnesses have come forward and placed here at the sites of additional green paint vandalism in our nation's capitol.

"Give me your tired, your poor,
Your huddled masses yearning to breathe free,
The wretched refuse of your teeming shore.
Send these, the homeless, tempest-tost to me