Warning: mysqli_free_result() expects parameter 1 to be mysqli_result, bool given in /var/www/html/americanthinker/admin/common/functions/func.general.php on line 126
 Obama co-sponsored bill strengthening Illinois stand-your-ground law in 2004 - American Thinker
« Fewer competitive House and Senate seats in 2014 means possible GOP gains | '25 Facts About The Fall Of Detroit That Will Leave You Shaking Your Head' »
|

Now we have proof that the current Obama-Holder campaign against stand-your-ground laws is nothing more than a pose intended to distract from their political problems, having whipped up a racialist fury and pushed prosecution of George Zimmerman. Although State Senator Barack Obama could boast of few legislative accomplishments, one thing he did do was co-sponsor a bill strengthening the Illionois stand-your-ground law. The Illinois Review writes:

The Obama-sponsored bill (SB 2386) enlarged the state's 1961 law by shielding the person who was attacked from being sued in civil court by perpetrators or their estates when a "stand your ground" defense is used in protecting his or her person, dwelling or other property. 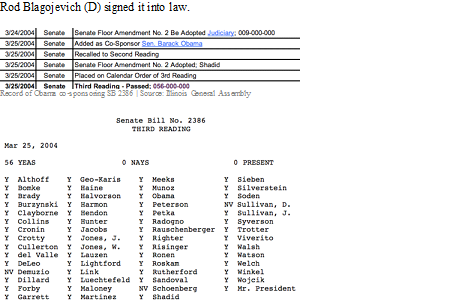 As most conservatives, few liberals, and no low information voters know, Florida's stand-your-ground laws has disproportionately benefitted blacks. The fury being pushed by the Democrat-media complex is pure sham, intended to distract from the embarrassment caused by the pursuit of George Zimmerman when there was no case.