A former member of then- Secretary of State Hillary Clinton's protective detail has been sentenced to a year in prison, extending the string of scandals that have engulfed the agency since Mrs. Clinton's tenure began.  The diplomat had faced a possible 7 year term, but pleaded guilty, sparing the expense and delay of a trial and perhaps shortening his sentence.  AP reports:

to a year in prison for accepting gifts in exchange for helping a Jamaican musician gain a U.S. visa.

The Daily Gleaner of Jamaica adds:

Court records reveal that the former security chief befriended the well-known entertainer, identified only as DB.

The entertainer had been barred from entering the US because of allegations of criminal conduct.

Rainsberger's investigation of the entertainer resulted in the reinstatement of the Jamaican entertainer's visa.

In return for his assistance, court records say he received two luxury watches from the entertainer as well as a birthday party hosted by DB and free admission to nightclubs.

This is only the latest scandal to hit the State Department for activity during the term of Hillary Clinton. Last month, S.A. Miller and Geoff Earle of the New York Post wrote:

A State Department whistleblower has accused high-ranking staff of a massive coverup - including keeping a lid on findings that members of then-Secretary Hillary Clinton's security detail and the Belgian ambassador solicited prostitutes.

A chief investigator for the agency's inspector general wrote a memo outlining eight cases that were derailed by senior officials, including one instance of interference by Clinton's chief of staff, Cheryl Mills.

Any mention of the cases was removed from an IG report about problems within the Bureau of Diplomatic Security (DS), which provides protection and investigates crimes involving any State Department workers overseas.

In order to maintain the media-generated illusion that Mrs. Clinton was an excellent SecState, as if miles flown on a private 757 were an index of effectiveness, the media are for the most part ignoring the burst of scandal uncovered in her wake. Rainsberger's sentence, for instance, merited an AP dispatch, but it does not appear to have been widely picked up, despite the fact that it closely follows news of another similar scandal.

The New York Times obviously thought that news of a corrupt State Department official headed for the slammer is not fit to print. Bribery of a bureaucrat does not belong in the national consciousness.

The suppressed news of Rainsberger follows  another similar scandal coming to light. Via the Daily Caller two days ago:

A State Department officer has been accused of selling visas for sex and money in what may have been a massive human trafficking operation, The Daily Caller has learned.

The State Department acknowledged last week that one of its officials is the target of a probe over "allegations of improprieties relating to a Consular Officer formerly assigned to Georgetown, Guyana" without providing further details. Local media are also claiming the official, who was recently withdrawn from normal duties pending completion of an official investigation, associated with drug lords as part of his visa scam.

The Daily Caller has identified the suspect as Edy Zohar Rodrigues Duran, formerly of Mission, Texas, and currently living in Falls Church, Va.

Duran was removed from his post at the Guyanese capital of Georgetown in June of this year, months short of his scheduled September 2013 departure date, according to Mark A. Benschop and Julia Johnson, two Guyanese journalists who spoke with TheDC from Guyana.

The scandal-ridden tenure of Hillary Clinton should be exposed for what it was, a period in which a culture of 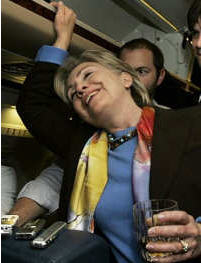 corruption flourished, where rules were flouted, and a wink and a nod greeted personal indiscretions.  Polling data tells us that the public largely regards her term as the nation's chief diplomat as a success. But that is a media-generated impression, fuelled by casual praise offered by media sycophants and the impressive amount of CO2 her airliner emitted as she gallivanted from one capital to another.

Mrs. Clinton is the presumptive nominee of the Democratic Party in 2016. A war is being fought by the liberal media in supprot of that candidacy, and so far it has won. The media cofferdam around Rainsberger is holding.