During 2011, Texas and Oklahoma experienced a significant drought -- something not unusual in these regions.  But like clockwork, the climate hysteria started to appear in the scientific literature and mainstream media.  Seth Borenstein from the Associated Press covered the issue.  Borenstein's article featured a discussion regarding the findings of a study in the journal Proceedings of the National Academy of Sciences (PNAS) by James Hansen and colleagues.

In the Acknowledgments section of Hansen's PNAS paper, we find the following statement:

We thank Tom Karl, Andrew Weaver, and an anonymous editor for helpful reviews that significantly improved the paper.

The science in Hansen's study is excellent 'and reframes the question,' said Andrew Weaver, a climate scientist at the University of Victoria.

Responsible objective journalism should require Borenstein to inform his readers that Weaver was a reviewer for Hansen's paper, putting Weaver in a real and/or perceived conflict of interest.

In Borenstein's article, as well as in Hansen's paper, the 2011 Texas/Oklahoma drought was attributed to climate change, as Borenstein's notes:

In a blunt departure from most climate research, Hansen's study -- based on statistics, not the more typical climate modeling -- blames these three heat waves purely on global warming:

- The 2010 heat waves in Russia and the Middle East, which led to thousands of deaths.

- The 2003 European heat wave blamed for tens of thousands of deaths, especially among the elderly in France.

In order to test these claims, we can look to NOAA's National Climatic Data Center (NCDC) database, which keeps climate and drought severity index records for Texas and Oklahoma dating back to the late 1800s.

There is not a single statistically significant summertime or annual temperature, precipitation, or drought index trend for Texas between 1895 and 2011.  Indeed, there is a more likely chance that long-term drought severity is declining in Texas rather than increasing.

For Oklahoma, the climate is clearly warming, but it is also becoming wetter -- both on an annual basis.  Summertime temperatures and precipitation in Oklahoma are not changing.  The severity of drought conditions in Oklahoma appears to be declining over time, not increasing.  There also appears to be no evidence for a trend towards greater climatic or drought variability in either state.

Unfortunately, these articles were not the only troubling public statements about the Texas drought.  During the U.S. House of Representatives Committee on Science, Space, and Technology hearings into "Drought Forecasting, Monitoring and Decision-making: A Review of the National Integrated Drought Information System [NIDIS]" on July 25, 2012, Dr. James S. Famiglietti -- director of the University of California Center for Hydrologic Modeling and Professor of Earth System Science and Civil and Environmental Engineering at the University of California at Irvine -- made the following statements in his written testimony:

Could we have seen this drought coming? Consider the Texas drought, which has been characterized as having started about 18 months ago. However, data from the NASA GRACE mission shown here, which depict changes in all of the water stored in the central part of the Gulf Coast Drainage (USGS HUC2 region) suggest that the decline has been going on for much longer - three years or perhaps more. If such data had been integrated into NIDIS, could they have provided an earlier warning and better preparedness (data latency issues notwithstanding)? With the proper level of investment in monitoring and predictive tools, maybe, yes, we could have seen it coming.

Famiglietti presented the following figure along with this written testimony: 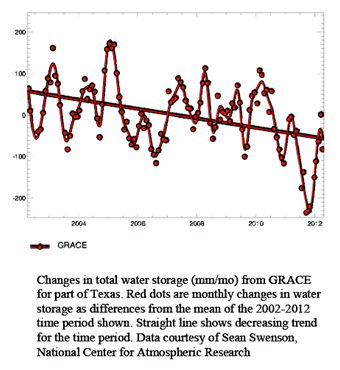 If one looks closely at this figure (the data for which do not appear to be publicly available), Famiglietti's linear regression line appears to be strongly defined by the last year of data.  Indeed, in the period before the last 18 months of record (i.e., from 2002 to 2010), there appears to be no significant trend in total water storage.  One could even argue for an increasing trend from 2006 up to 2010.  Consequently, there appears to be no evidence in the 2002-2010 data record that any 2011 drought predictions could have been made at a reasonable level of confidence.

Overall, there seems to be no evidence that climate change was responsible for the Texas/Oklahoma drought of 2011.  As well, Famiglietti's presentation to the House committee is not persuasive that Texas's drought could have been predicted.