Warning: mysqli_free_result() expects parameter 1 to be mysqli_result, bool given in /var/www/html/americanthinker/admin/common/functions/func.general.php on line 126
 Manning found not guilty on most serious charge, guilty on others - American Thinker
« WaPo Obsessed with Settlements | Author, Historian Ron Radosh guests on Moran's show »
|

Manning found not guilty on most serious charge, guilty on others

Bradley Manning will face prison time for his leak of classified information, but was acquitted on the most serious charge, of aiding the enemy. Evidently, the case was not made beyond a reasonable doubt that he knew that the information would fall into the hands of Al Qaeda.

Elizabeth Goitein, a co-director of the non-partisan Liberty and National Security Program at the Brennan Center for Justice [said]:

"The judge rejected the government's argument that Manning, by virtue of his training as an intelligence officer, must have known that the information he disclosed was likely to reach al Qaeda," Goitein said in a written statement. "But she also ruled that Manning had reason to believe his disclosures could harm the U.S., even if that was not his goal." (snip)

He said the information he passed on "upset" or "disturbed" him, but there was nothing he thought would harm the United States if it became public. Manning said he thought the documents were old and the situations they referred to had changed or ended.

"I believed if the public was aware of the data, it would start a public debate of the wars," he said during his court-martial. He was "depressed about the situation there," meaning Iraq, where he was stationed as an intelligence analyst. 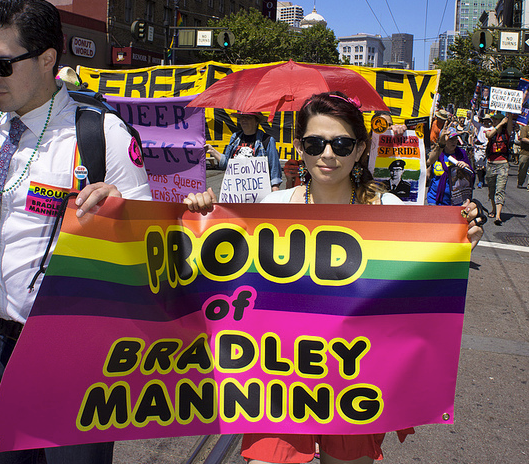 Manning will no doubt end up doing hard time, and his fans will regard him as a martyr. The debate on the government's domestic spying will continue.