It's always surprising to hear an economist argue that macroeconomic austerity doesn't work, particularly when the economist is Canadian and was a recent advisor to the minister and deputy minister of finance of a purportedly conservative government (of course, in Canada, even a so-called federal conservative party is actually quite liberal).  The shock comes because Canada actually ran the macroeconomic austerity experiment between 1993 and 2006, and it worked.  Even more amazing is that the experiment was successfully run under a liberal government.  Perhaps some economists should be more aware of their nation's own economic history.

The following plot shows general government total expenditures as a percentage of GDP for Canada and the USA between 1980 and 2012. 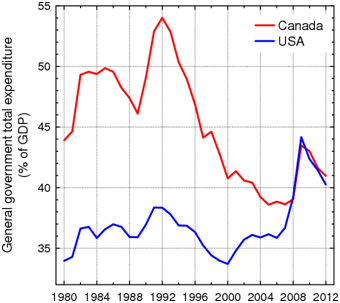 Martin's financial reforms and steady economic management skills reduced general government total expenditures from 52.9% of GDP in 1993 down to 38.8% in 2006.  Martin's last full year as prime minister was 2005, at which point the expenditures were only 38.6% of GDP.  In February 2006, Martin lost a federal general election to Stephen Harper and the Conservative Party -- who have governed since.

How did these 1993-to-2006 austerity measures affect Canada's economic performance?  During the high-spending period between 1980 and 1992, per capita GDP-PPP in constant dollars rose by only 12.4%.  During the corresponding austerity interval from 1993 through 2006, constant-dollar per-capita GDP-PPP rose by 27.4%.  A clear win for austerity.

Macroeconomic austerity doesn't work?  Absolute nonsense.  During its austerity period, Canada's per capita government expenditures fell, its per capita GDP increased far more rapidly than during the prior period of rapid spending growth, its large deficits turned into large surpluses, its debt was dramatically reduced, and its unemployment rate fell like a rock.  This is a lesson that not only the rest of the world needs to heed, but apparently also Canadian economists who have recently advised a faux conservative administration.

Sierra Rayne holds a Ph.D. in chemistry and writes regularly on environment, energy, and national security topics.  He can be found on Twitter at @rayne_sierra.