We can now officially say that the IRS harassment of conservative groups is a political scandal connected to the Obama political machine. Despite the best obfuscatory efforts of Obama henchmen like Rep. Elijah Cummings, yesterday the IRS scandal was tied to a political appointee of President Obama. Step-by-step the chain is being followed upward by the House Oversight Committee chaired by Rep. Darrell Issa.

Jay Carney's assurances that two rogue agents in a back office in the 27th most populous metropolis of America were the problem has been exposed as a blatant, outrageous lie.  Now we know that Obama's hand-picked agent was leading the initiative, as far as the people below him in the federal apparatus knew.

Now we begin to prepare the vice to squeeze the Obama political appointee, perhaps making an immunity grant to Lois Lerner a possibility. Keep in mind, it is not an offer, it is an involuntary grant she cannot refuse.

Peggy Noonan at the Wall Street Journal concisely explains the evidence that was developed, following the chain of authority upward, with names.

House investigators soon talked to workers in the Cincinnati office, who said everything they did came from Washington. Elizabeth Hofacre, in charge of processing tea-party applications in Cincinnati, told investigators that her work was overseen and directed by a lawyer in the IRS Washington office named Carter Hull.

Now comes Mr. Hull's testimony. And like Ms. Hofacre, he pointed his finger upward. Mr. Hull-a 48-year IRS veteran and an expert on tax exemption law-told investigators that tea-party applications under his review were sent upstairs within the Washington office, at the direction of Lois Lerner.

In April 2010, Hull was assigned to scrutinize certain tea-party applications. He requested more information from the groups. After he received responses, he felt he knew enough to determine whether the applications should be approved or denied.

But his recommendations were not carried out.

Mr. Hull told House investigators that at some point in the winter of 2010-11, Ms. Lerner's senior adviser, whose name is withheld in the publicly released partial interview transcript, told him the applications would require further review:

Q: "Did [the senior adviser to Ms. Lerner] indicate to you whether she agreed with your recommendations?

A: "She did not say whether she agreed or not. She said it should go to chief counsel."

A: "The IRS chief counsel."

The IRS chief counsel is named William Wilkins. And again, he is one of only two Obama political appointees in the IRS.

What was the chief counsel's office looking for? The letter to Mr. Werfel says Mr. Hull's supervisor, Ronald Shoemaker, provided insight: The counsel's office wanted, in the words of the congressional committees, "information about the applicants' political activities leading up to the 2010 election." Mr. Shoemaker told investigators he didn't find that kind of question unreasonable, but he found the counsel's office to be "not very forthcoming": "We discussed it to some extent and they indicated that they wanted more development of possible political activity or political intervention right before the election period."

It's almost as if-my words-the conservative organizations in question were, during two major election cycles, deliberately held in a holding pattern.

The great hope of the Democrats is that the scandal is complicated that sufficient numbers of the public can be distracted with Rolling Stone covers and celebrity gossip, and media allies will entomb the story, so it will go away. There appears to be a media blackout on the hearings, other than Fox News and consrevative outlets. For instance the Washington Post, betraying its Watergate legacy, failed to note the story of yesterday's hearings. 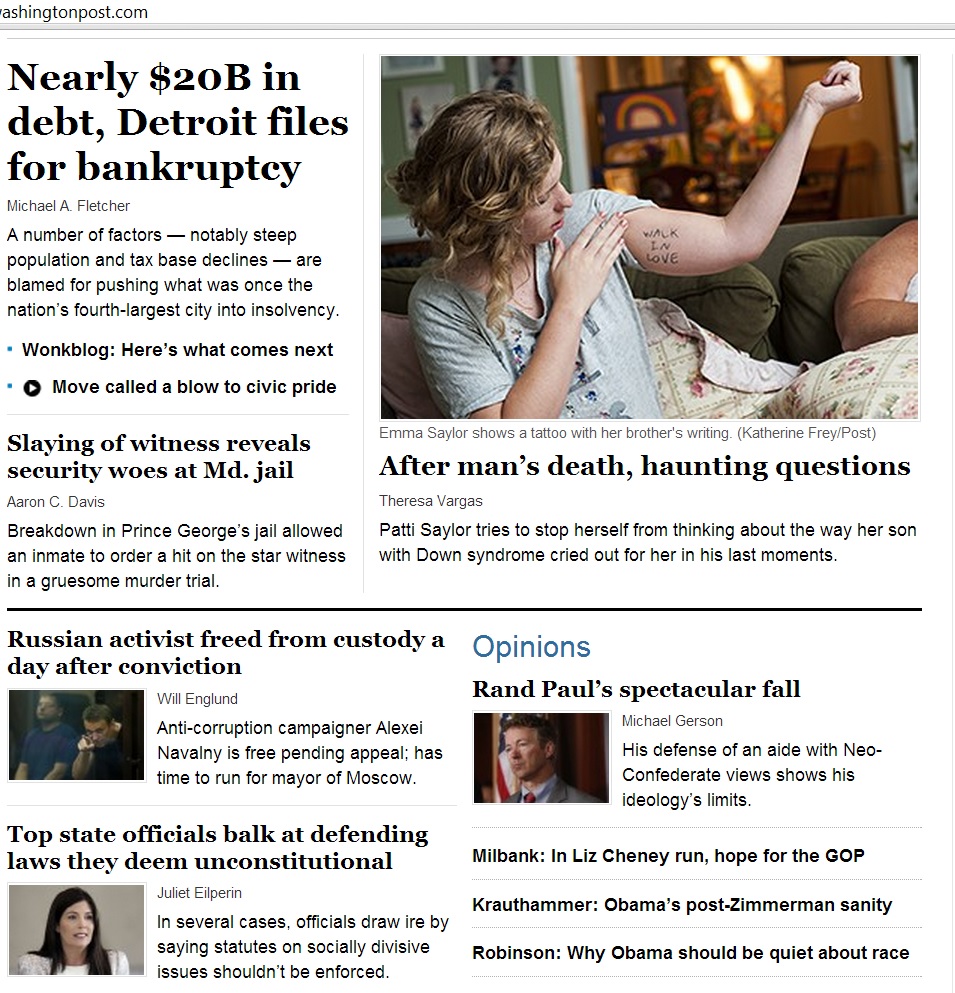 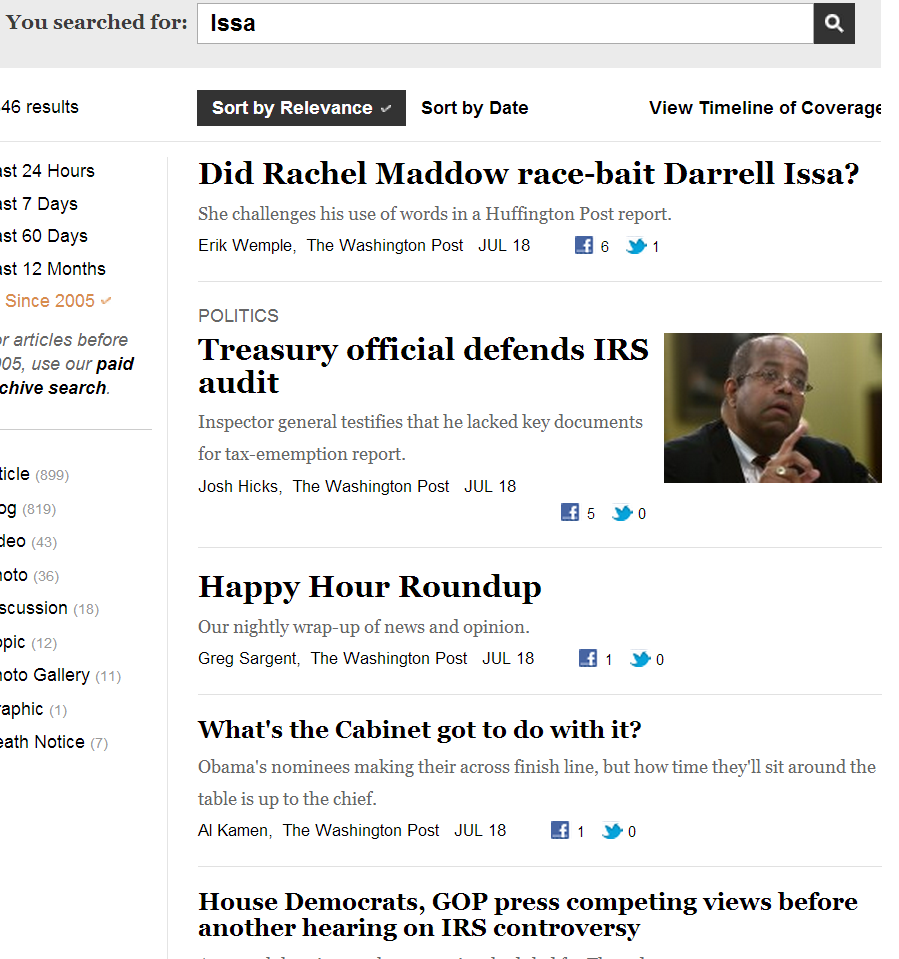 But Chairman Issa is not willing to play along.

Yesterday, Bill O'Reilly called out Rep. Cummings for his disgraceful role in obstructing the inquiry with chaff about liberal groups purportedly also scrutinized. He recognizes that we have a genuine serious political scandal on our hands, and he has the guts to lay it out for those considering covering it up. They will pay a price for obstruction of political justice. I agree with him entirely that Rep. Cummings is behaving as a scoundrel. He deserves mockery and contempt, ridicule being, as Alinsky pointed out, unanswerable.

The political suppression of the opposition through abuse of the IRS sounds to me like a pretty damn big deal. It is time to speak bluntly in the face of those who want to tap dance away from a true high crime.

Update: Commenter Antonius lays out in more detail the way the vise is tightening, and why this matters.

...the little ones are rolling over on the big ones to protect themselves. They are naming names to avoid taking the fall for something they were ordered to do by the White House. Carter Hull rolled over and named names to protect his pension after 48 years of government service. He pointed the finger at the head of the office of chief counsel William Wilkins who is one of only two political appointees at IRS. Hull further implicated Lois Lerner and destroyed her insistence that she had done nothing wrong. Lerner is up to her eyeballs in this and she knows it! Investigation of this scandal by congressional committee was absolutely the right call, and an independent counsel would have been a disaster!

Now we know the reason for all of those White House meetings by the IRS commissioner! He was getting his marching orders from the administration to crack down on conservative political groups prior to the election and reporting on his progress while delivering confidential tax information to the administration on conservative political candidates and donors which they then passed on to progressive groups who smeared conservatives in the elections! (snip)

Obama used the IRS to target his political opponents to insure his reelection in a stunning abuse of power that used the unlimited resources of the government to deny political speech in violation of the most basic tenets of the Constitution! America rightly condemns this sort of heavy handed government interference in the political process when third world countries do it, but then Obama turns around and does the very thing in America that we routinely decry in others. This is so serous an infringement on liberty that it was the first article of impeachment against Richard Nixon!

As the facts come out, there will be increasing pressure on Democrats. I am not as skeptical as many commenters, and Antonius himself. This is explosive material, and Democrats that have any integrity left (and there are some, like Alan Dershowitz, are going to have face their own consciences and speak out.