Warning: mysqli_free_result() expects parameter 1 to be mysqli_result, bool given in /var/www/html/americanthinker/admin/common/functions/func.general.php on line 126
 An Effective American Naval Blockade on Chinese Oil Imports - American Thinker
« How Sharia Rapes Justice | Maryland, and others, gets the 'hope and change' that they voted for »
|

In a recent article from the Journal of Strategic Studies, Sean Mirski -- currently a student at Harvard Law School --develops an excellent discussion on "the context, conduct and consequences of an American naval blockade of China." Mirski argues that, if required, the United States could implement a naval blockade of China (despite Chinese A2/AD capabilities) via both close and distant blockade lines, and that such efforts would cripple the Chinese economy. Consequently, China would likely be pressed to negotiate terms with the USA regarding whatever issue(s) led to the blockade.

As Mirski correctly notes, and as others before have observed, China is highly dependent on maritime energy imports in order to sustain its economy. Mirski writes the following:

"China's trade is borne on the seas largely as a result of economic considerations rather than physical limitations. If Beijing were blockaded by sea, it would turn to overland imports and the transshipment of oil and other resources by third parties. For this reason, the success of an American blockade would hinge on China's ability to substitute for its lost imports with overland shipments either bought directly from its neighbors or transited through them from elsewhere.

Among China's neighbors, Russia and Kazakhstan are the only states that produce enough petroleum to dull the pain of an American blockade. Russia is the world's largest oil producer, and it produces enough petroleum -- over ten million barrels per day -- that it could singlehandedly supply China with enough oil for all its needs. Kazakhstan produces slightly less than two million barrels per day, and could also go a long way towards relieving a blockade. Admittedly, China currently only has the potential to import roughly 500,000 barrels of oil per day via the Russian and Kazakh pipelines. But if China's demand for oil became sufficiently robust -- as it would in the context of a blockade -- then Beijing would undoubtedly be willing to pay the higher cost of shipping Russian and Kazakh oil via railway systems and in trucks. While China would likely discover that infrastructural constraints would limit the aggregate total that could be shipped, it would still be able to recoup a large portion of its blockaded imports."

In contrast, I will argue that China's oil import requirements are growing so rapidly that -- even if they devoted their entire projected oil export market to China, and overland transport practicalities could also be ignored -- Russia and Kazakhstan will not be able to mitigate the severe impacts of an American naval oil blockade for much longer.

The following plot shows China's oil consumption, production, and net imports since 1985, as well as Russia's and Kazakhstan's total net oil exports over the same period (all data from the 2013 BP Statistical Review of World Energy). 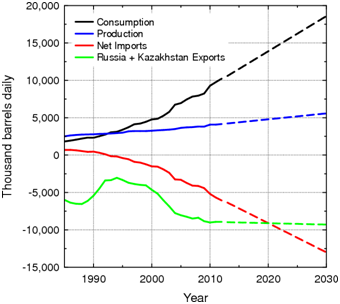 The dashed lines are linear extrapolations of the 2001-2012 trends for China. These projections are conservative (i.e., underestimate likely future Chinese oil imports), as China's oil consumption and imports have both been increasing exponentially (not linearly) over the past three decades. Russia's and Kazakhstan's oil exports have been static since 2009 at a combined quantity of about 9 million barrels per day. This value is assumed to remain constant for the foreseeable future.

Based on the data above, it appears that by 2020 (and likely much earlier given the conservative nature of these estimates), China will be unable to meet its oil import needs via land transport should it be so required by an American naval blockade (even assuming the logistics of massive over-land imports from Russia and Kazakhstan could be resolved in a short timeframe). Furthermore, the gap between China's ever-increasing oil import needs and what Russia and Kazakhstan could possibly supply is expected to increase rapidly beyond 2020, further enhancing the economy-crippling impact of a blockade.

The findings in no way diminish Mirski's thesis. Indeed, they reinforce his views that "if enacted, a blockade could exact a ruinous cost on the Chinese economy and state," a fact which should be more effectively exploited by the West's foreign policy towards China's progressively more problematic geopolitical behavior.