Debbie Wasserman Schultz has claimed her Florida constituency will be underwater "in a few short years" because of global warming. Andrew Johnson in NRO:

Representative Debbie Wasserman Schultz (D., Fla.), who represents the Miami area, warned that unless climate change is addressed "in a few short years," rising sea levels will force her to represent areas more than two hundred miles away.

"I will eventually represent Orlando if we don't do something about making sure we can reduced (sic) global warming," she said on Fox News this morning. Wasserman Schultz's current residence, Weston, Fla., is 224 miles away from Orlando. 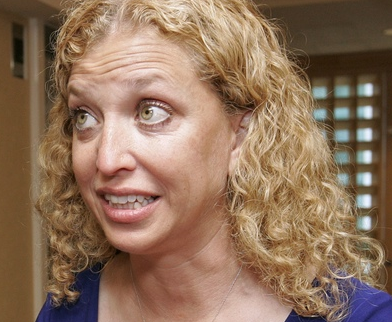 the ocean level will rise, there is no reason to fear. You see, this senior Democratic Party official has revealed to the nation that the Republican Party possesses a time travel tool, capable of taking the world into the past. We can decide which era in the earth's ever-changing climate history was ideal (I suspect Minnesotans and Floridians may disagree on this point), and simply ask the GOP to drag us back there. She let the secret out of the bag two years ago:

"[I]f you go back to the year 2000, when we had an obvious disaster and - and saw that our voting process needed refinement, and we did that in the America Votes Act and made sure that we could iron out those kinks, now you have the Republicans, who want to literally drag us all the way back to Jim Crow laws and literally - and very transparently - block access to the polls to voters who are more likely to vote Democratic candidates than Republican candidates.