Steven Emerson and John Rossomando of The Investigative Project on Terrorism, who broke the story of the meeting, explain who Bayyah is:

Bin Bayyah is vice president of the International Union of Muslim Scholars (IUMS), a group founded by and headed by Qaradawi. The IUMS has a long history of supporting Hamas -a top Hamas leader is an IUMS member - and of calling for Israel's destruction.

Radical Egyptian cleric Yusuf Qaradawi is considered so radical that the United States bans him from entering the country.

Qaradawi, considered the spiritual leader of the Muslim Brotherhood movement, has called for the killing of Jews andAmericans.

According to Bin Bayyah's website, it was the White House which asked for the meeting:

"We asked for this meeting to learn from you and we need to be looking for new mechanisms to communicate with you and the Association of Muslim Scholars (another name used for the IUMS)," Gayle Smith, senior director of the National Security Council, reportedly said.

Bin Bayyah's June 13 account placed other senior officials in the meeting, including:Rashad Hussain, the U.S. special envoy to the Organization of Islamic Cooperation (OIC), National Security Adviser Tom Donilon and White House spokeswomanJennifer Palmieri. But the account was later changed to delete the reference to Donilon's presence at the meeting.

Here is a picture of the meeting from Bin Bayyah's website: 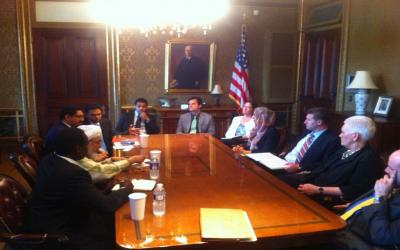 Patrick Poole notes at The PJM Tatler that this meeting was brewing for quite some time:

What's even more remarkable about bin Bayyah's White House reception is that he was one of the clerics endorsing a IUMS fatwa in November 2004 authorizing the killing of Americans in Iraq. Bin Bayyah was vice president of the organizationat the time. The IUMS fatwa was even promoted on the official Iraqi resistance website.

More recently, bin Bayyah capitalized on the terrorist attack on the U.S. consulate in Benghazi last September to appeal to Western governments to criminalize defamation of Islam (a call seconded by some U.S. Islamic organizations), as the administration began pushing the bogus "YouTube video" justification for the attack:

We are extremely concerned with a small active minority in your countries that seeks to perpetuate a state of conflict and war.

The White House has a lot of explaining ahead on this outrageous honor accorded Bin Bayyah. Without the work of the IPT, we would not have known of it.