Warning: mysqli_free_result() expects parameter 1 to be mysqli_result, bool given in /var/www/html/americanthinker/admin/common/functions/func.general.php on line 126
 Obama: The Ghost of Columbia University - American Thinker
« The immigration bill has a 'gang of 8' but not 60 votes | Michelle Obama threatens to leave DNC fundraiser unless heckler shuts up »
|

Obama: The Ghost of Columbia University

Why does no one attending the thirtieth reunion of Barack Obama's graduating class at Columbia University remember meeting him? That's the intriguing question raised by Wayne Allyn Root in a piece published at the Blaze:

We shared the same exact major- Political Science. We were both Pre Law. It was a small class- about 700 students. The Political Science department was even smaller and closer-knit (maybe 150 students). I thought I knew, or met at least once, (or certainly saw in classes) every fellow Poly Sci classmate in my four years at Columbia.

But not Obama. No one ever met him. Even worse, no one even remembers seeing that unique memorable face. Think about this for a minute. Our classmate is President of the United States. Shouldn't someone remember him? Or at least claim to remember him? (snip)

No one that ever met Obama, let alone befriended him, was in attendance at our 30th class reunion.

Now you might argue this is all strange, but it's possible. Afterall Columbia says he graduated. And I take my college's word for it. Would one of the world's greatest Ivy League institutions participate in a coverup, thereby risking their billion dollar reputation? And there is one single article written for the Columbia newspaper with Obama's name on it. A single photo also exists of Obama in his Manhattan apartment with the man he claims was his college roommate- a Pakistani foreign student. And one single radical leftist Columbia professor who hates Israel also claims he remembers Obama.

That's the sum total of Obama's existence at Columbia University, Class of '83.

Is it conceivable to a tall man of striking racial heritage could spend 2 years in a class of 700 without anyone meeting him and remembering him? This beyond strange. But then again, there are so many strange aspects to the Obama biography. My favorite mysterious piece of data is the photo below, picturing young adult Barack Obama with his grandparents. 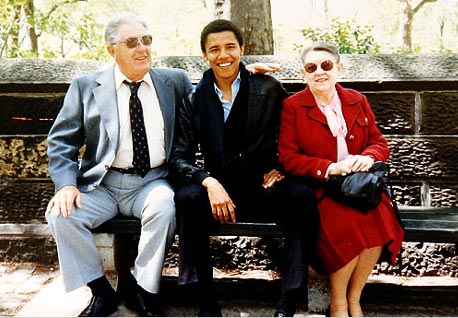 Take a look at the hand of Stanley Dunham over the left shoulder of Barack. Is there any way that the hand could be connected to Dunham's left arm? The American media actively ran interference for attempts to investigate the background story offered about the man who suddenly rose from the back benches of the Illinois state legislature to the Oval Office, and the race card weas played so many times that it became dog eared.

Now that the bloom is off the rose, one might expect some degree of curiosity, but realistically, the code of silence will continue to reign.